Chinese Waves: The Limits to Beijing’s Influence in the South Pacific

China’s engagement with the states of the South Pacific Ocean has accelerated in recent years. But while policymakers and academics in Australia, New Zealand and Pacific island states increasingly talk about China’s growing influence, Beijing actually operates in the region under a number of constraints and there are limits on the role it can play. 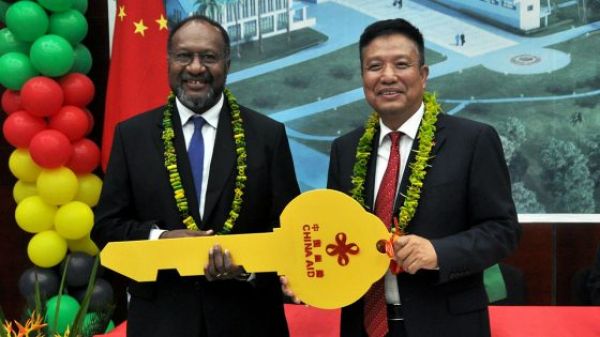 Since 2011, China has provided US$1.26 billion to Pacific Island countries, ranking it the second largest donor in the region and second only to Australia. This trend is expected to continue as the Chinese leadership, including President Xi Jinping, is enthusiastically promoting China-Pacific cooperation under the framework of the Belt and Road Initiative (BRI). Bilateral trade between China and the Pacific has also boomed. The trade volume reached US$8.2 billion for 2017, nearly a 10-fold increase over US$834 million in 2005. China’s imports increased from US$414 million in 2005 to US$3.48 billion in 2017. The number of Chinese tourists to the Pacific region also jumped from 3,969 in 2008 to 143,398 in 2017.

China has been a main catalyst for the New Pacific Diplomacy, a term that refers to the more active and diversified diplomacy conducted by Pacific island states in the past decade. China has substantially increased its engagement. In 2014, Xi paid his first state visitto the region when he landed in Fiji in November 2014. Pacific leaders such as Papua New Guinea (PNG) Prime Minister Peter O’Neill, Fijian Prime Minister Frank Bainimarama and Samoan Prime Minister Tuilaepa Malielegaoi have visited China in recent years. Chinese aid to its eight diplomatic partners in the region, including PNG, Micronesia, Fiji, Samoa, Tonga and Vanuatu, as well as New Zealand’s associated states of the Cook Islands and Niue, has soared.

Fiji is a typical example of this new diplomacy. After a military rebellion in December 2006 – Fiji’s fourth coup d’état in two decades – the Western powers imposed political and economic sanctions and suspended its membership in the Pacific Islands Forum and the Commonwealth. China stepped in to fill the void by providing considerable diplomatic, trade and financial support to the interim military regime, which reaffirmed its “Look North” policy to deepen cooperation with Asian powers. China also provided financial support to Fiji when it convened the Pacific Islands Development Forum in 2013, a new regional mechanism perceived by some as a challenge to the Pacific Islands Forum.

China’s presence is also felt in Taiwan’s diplomatic relationships in the region. Beijing is the Solomon Islands’ largest trade partner, absorbing nearly two-thirds of total exports, mainly lumber, in 2017. Closer economic links could affect diplomatic relationships as Solomon Islands’ previous ruling party announced its intention to review the country’s relations with Taiwan. China is the second-largest source of imports to the Marshall Islands, a US associated state, accounting for more than one-fifth of its total imports in 2017. As for Palau, an island country in association with the US, it remains China’s largest tourist destination in the Pacific, although the number of Chinese tourists decreased from 64,900 in 2016 to 57,866 in 2017 due to Beijing’s intervention amid revived diplomatic competition between China and Taiwan.

Despite the above, China’s influence in the Pacific region faces significant constraints, which limits China’s capacity to challenge, let alone replace, traditional powers. The degree of transparency of China’s engagement with the Pacific is a major issue. For example, the lack of data on Chinese aid to the region and the breakdown of this aid by recipient country and year have bred speculation about China’s actual aid volume and motivations. Although China committed impressive amounts to Pacific island countries during bilateral high-level visits and the two meetings of China-Pacific Islands Economic Development and Cooperation Forum in 2006 and 2013, actual disbursements remain a mystery. Insufficient information about Chinese loan agreements has also led to criticism of Chinese aid regarding the use of labor, equipment and environmental impact, to name just a few matters of concern.

China’s tendency to focus on government-to-government approach also limits its outreach to the general public and civil societies in the Pacific. China is incomparable with Australia and New Zealand, which have developed strong links to a wide range of actors in Pacific countries such as political parties (both ruling and opposition), churches, non-governmental organizations, women’s groups and local communities. China’s government-to-government approach limits its influence among these groups, which is exacerbated by growing resentment against the overwhelming dominance of much of the Pacific island countries’ retailing sector by the Chinese business community, including the occurrence malpractices (such as selling inferior quality products, illegal migration and bribery) Although part of the problem stems from the perceived weakness in state institutions and levels of corruption that might have allowed this to happen, Chinese businesses have become a clear target during social unrest, such as riots in the Solomon Islands (April 2006) and Tonga (November 2006).

A more recent concern about China policy in the Pacific is debt. Concessional loans represent more than half of Chinese aid, relative to grants and interest-free loans. After a five-to-seven-year grace period, Pacific island countries are required to start repaying Chinese concessional loans. Concerns are growing among traditional donors about the risk of Pacific indebtedness and potential debt-for-equity swaps if these states default on Chinese loans, with the precedent of China obtaining a 70% share in Sri Lanka’s Hambantota port for 99 years in exchange for writing off the latter’s due debts. These concerns have been waved aside by a Chinese foreign ministry spokesperson as “irresponsible speculations”. In the Pacific, the current limelight is on Tonga, which owes from half to two thirds of its debts to China. The debt risk is temporarily shelved as Beijing granted Tonga another five-year grace period in November 2018 but how Beijing will ultimately deal with the debt issue remains unresolved.

China’s real influence in the Pacific has been exaggerated by policymakers, media and academia who fail to see the constraints. In February 2019, Dame Meg Taylor, Secretary General of Pacific Islands Forum, delivered a speech entitled “The China Alternative: Changing Regional Order in the Pacific Islands”. The Pacific region, she said, was “crowded and complex” and needs to figure out how it can “collectively engage with China”, given  the opportunities with the BRI that “merit careful analysis and discussion”. Infrastructure, she added, “remains a crucial requirement for ensuring resilience in the Pacific”. The Pacific region, she suggested, could consider establishing common and regional criteria to regulate infrastructure investment from development partners including China. The arrival of China, as an emerging superpower and with deep pockets, provides Pacific leaders with new financing and investment options and more leverage against traditional regional powers.

Dr Denghua Zhang is a research fellow at ANU’s Department of Pacific Affairs. His research areas include Asian powers in the Pacific, international relations, and development studies.