The publication of China’s latest census, followed shortly by the Politburo’s announcement of a shift to a three-child policy, replacing the two-child limit introduced in 2016, has stimulated debate both domestically and internationally. From the implementation of the one-child policy in 1980 until now, China’s unprecedented birth-control restrictions have been among the most contested and controversial social policies in the world. Joe Leung of The University of Hong Kong examines a sea change in attitudes from condemnation and coercion to facilitation and encouragement. 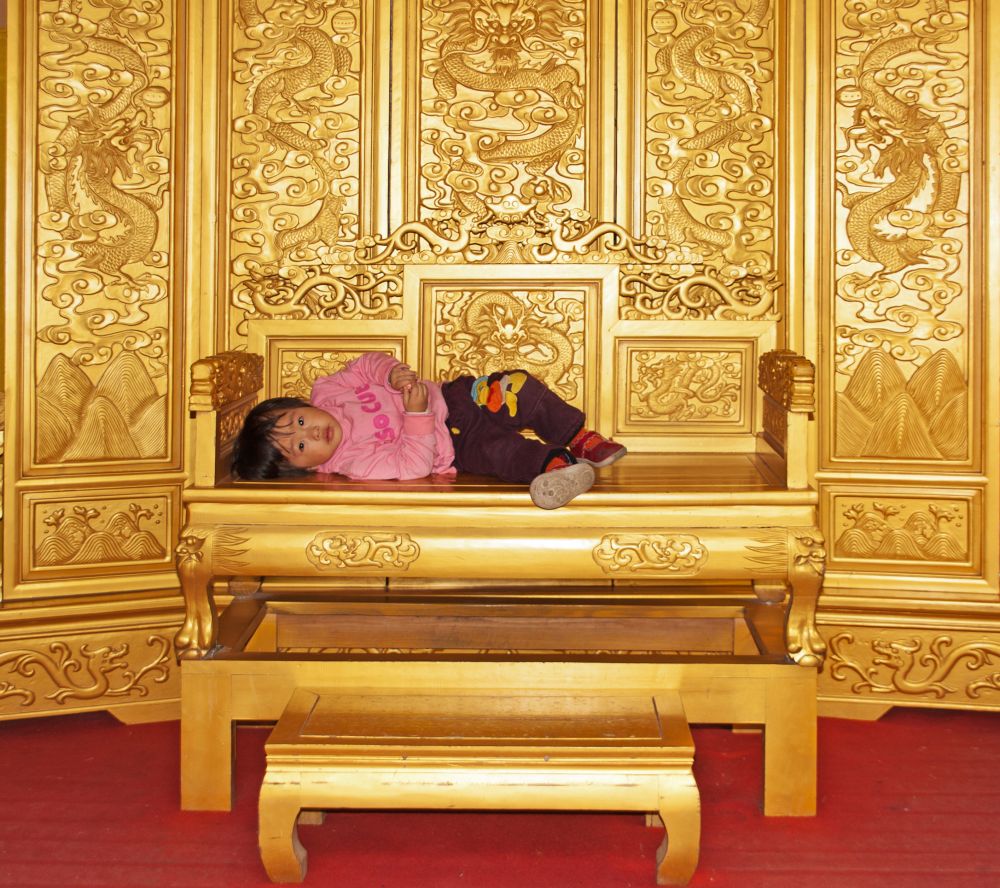 Little empress: After over 30 years of the draconian one-child policy, the idea of a small family is deeply ingrained in the mindsets of Chinese people (Credit: Pixeljoy / Shutterstock.com)

China’s recently published 7th National Census highlighted a number of key demographic trends. Chief among them: slowing population growth caused by the decline in birth and fertility rates, smaller family sizes, a higher proportion of aged people and a slight increase in the proportion of children, a shrinking working population – those aged between 16 and 59 – and a better educated, more mobile, and more urbanized populace.

Declining birth rates and population increases are due to a number of factors, including the declining number of women in peak reproductive years (those aged 20-34), delaying marriages and a falling number of marriage registrations, postponing parenthood, and a reluctance to have a large number of children. Preference for a smaller number of children in the family might be attributed to the rising costs of rearing kids, including housing, educational and healthcare. Furthermore, increased mobility and temporary residency discourage migrant families from settling down and planning to have children. The household registration system, or hukou, through which Beijing exerts control over internal movement, still discriminates against migrant children who want to gain access to quality education.

In 2020, the number of births in China was 12 million, compared to 14.65 million in 2019 – a drop of 18 percent. To be sure, the previous driver of economic growth, the abundant supply of workers, is being gradually eroded. More worrisome, due to controls on childbirth, the aging of the population is accelerating. This means that the financial and social costs of income maintenance for and long-term care of older people have become serious concerns. As the pace of these changes picks up in the coming decades, this will threaten China’s economic growth and its aspirations to soon become a high-income country. 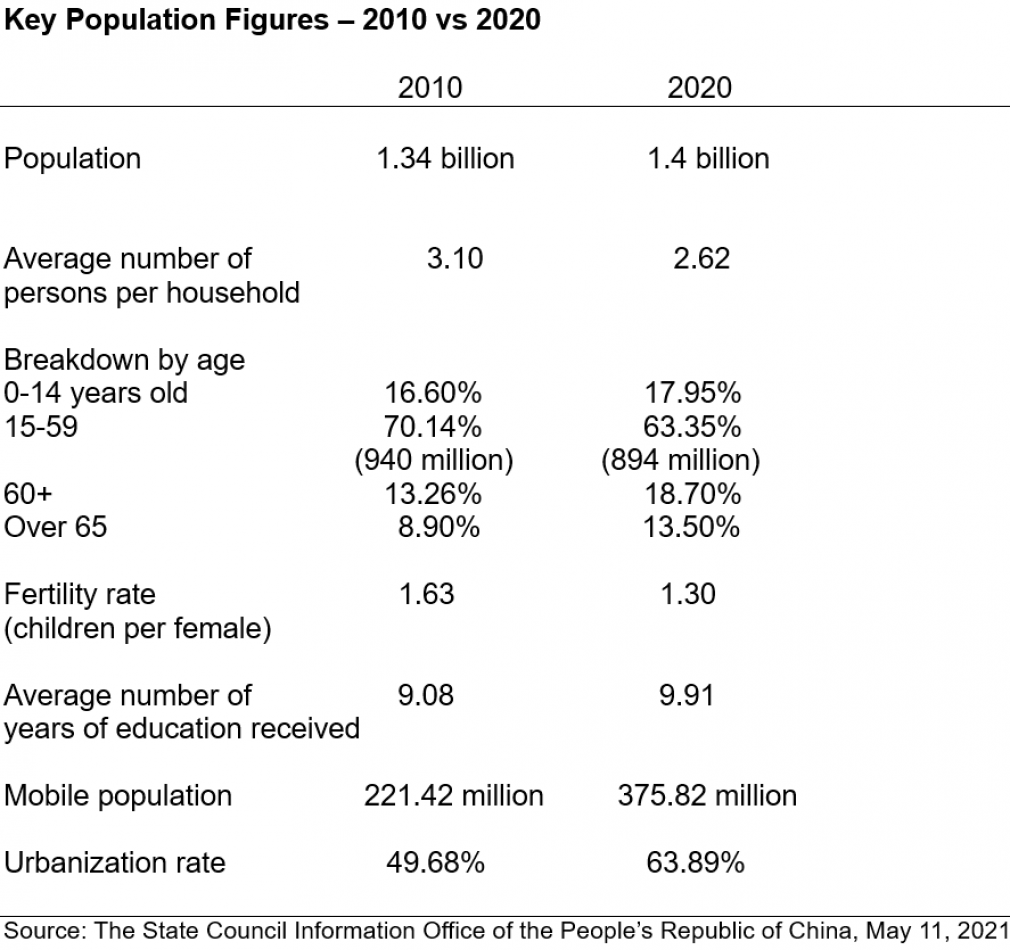 At its meeting on May 31, the Politburo announced the decision to allow couples to have up to three children. To support this policy shift, it has been working on a new coordinated and integrated plan – Decisions Concerning the Optimization of the Childbirth Policy to Promote Balanced Demographic Development. The strategy is expected to recommend postponing the retirement age and improving childcare services and maternity leave arrangements.

In reacting to the new policy, the majority of academics both in and outside China have been pessimistic and skeptical, arguing that the decision may be too little too late to reverse the nation’s declining birthrate and shrinking workforce. The impact of the previous relaxation of the childbirth policy in 2016, which resulted in the two-child policy, was less than expected. In 2013, the proportion of two-child births was only 30 percent. By 2017, that had increased to 50 percent, but gradually dropped back to 40 percent in the following years. Between 2014 and 2017, the two-child policy resulted in a net increase of 10 million children. Without new and effective incentives, the implementation of the three-child policy is likely to be just as lackluster.

Creating and sustaining policy impact will require a complementary policy to tackle a set of inter-related inhibiting factors, including gender discrimination in the workplace, a lack of appreciation of the value of child rearing, rising costs of raising children, long working hours and stressful employment environments, and workplaces that are not family friendly. The popularity of “double income, no kids” (DINK), or child-free, families has challenged the traditional sense of filial obligation to continue the family line. Women often face discrimination in the workplace because of pregnancy, relatively long maternity leave, and the inability to take business trips and work overtime because of childcare responsibilities. Described as the “motherhood penalty”, women with children find their pay and promotion prospects negatively affected. According to a recent report by the World Economic Forum on the gender gap, which covered four key areas – health, education, economy and politics – China ranked 107th in 2020 among 156 countries, down from 57th in 2008.

Any successful pro-birth policy will take two or three decades for it to have full impact on the labor market and aging population. In the short term, China will still have to face a declining workforce and bear the staggering cost of pensions and elderly care. This inevitable demographic trend, largely due to modernization, may be slowed down but is difficult to reverse. So far, no country has been able to increase childbirth and reverse the aging of its population.

Governments in some East Asian countries have introduced a variety of pro-birth policies including providing better and more extensive childcare services and subsidies, cash grants for babies, extending maternal leave and introducing paternal leave, tax allowances, and other child-related benefits. Yet, their fertility rates -- compared with those of Organisation for Economic Co-operation and Development (OECD) countries – have remained relatively low. In South Korea, for example, the total fertility rate (the average number of children that would be born to a woman over her lifetime if she experienced the exact current age-specific fertility rates through her lifetime and were to live from birth until the end of her reproductive life) is 0.84, the lowest in the world, while that of Hong Kong is 0.87, Taiwan 1.07, Singapore 1.223 and Japan 1.368. All are lower than the OECD average of 1.66. In short, there is no magic wand to solve demographic crises.

To be sure, after over 30 years of the draconian one-child policy, the idea of a small family is deeply ingrained in the mindsets of Chinese people. A national survey in 2019 indicated that fewer than half of families intend to have two or more children. Major reasons for not having more children were the financial burden (75.1 percent), the lack of childcare support (51.3 percent), and the difficulties for women to achieve work-family balance including lowered working wages (34.3 percent). An online survey by Xinhua News Agency immediately after the announcement of the policy found that about 90 percent of respondents would not ever consider having three children.

As China moves away from an economy based on labor-intensive industries towards technology- and capital-intensive development, the quality of the labor force has become a pivotal issue. The quality of the workforce matters more than the size of the population. Policies to invest in education, healthcare and family support for the upbringing of children would be vital to produce a quality workforce that would support China’s economic transition. The Census indicated that the percentage of the working population with university education was only 23.61 percent, indicating that the quality of China’s human capital is still relatively low. The OECD average is 39 percent.

According to the World Bank’s Human Capital Index (HCI) published in 2020, China ranked 45th in the world among 174 countries and regions. HCI measures factors such as the knowledge, skills and health that children born today can expect to attain by their 18th birthday. Human capital is the key driver of sustainable growth, productivity and poverty reduction. China’s current ranking indicates that the government needs to improve further its investment in healthcare and education.

Regional differences in birth and aging rates are still substantial. The crude birth rates – the ratio between the number of live births in a population during a given year and the total mid-year population for the same year, expressed as cases per 1,000 people – of the following provinces/regions are: northeastern provinces: 6.08; eastern provinces: 10.85; southern provinces: 12.91; Shanghai: 7; and Tibet: 14.6. In some provinces, such as Anhui, Shanxi, Hainan, Fujian, Henan and Jiangxi, the proportion of second-child births in 2020 was already on average around 50 percent. In terms of aging population rates, Liaoning recorded 16.2 percent of the population was over 60 years old, while Shandong was at 15.77 percent, Qinghai 8.31 percent, and Guangdong 9 percent.

More young people are migrating from northeastern provinces to the south, and from rural to urban areas. Policies to promote births and address the aging population might affect regions differently. The uncompromising application of a single pro-birth policy to the whole nation would not be advisable. A central government policy document is typically only a guide, not a law. It means that local administrations have the discretion and flexibility to be innovative in implementation according to the local context. 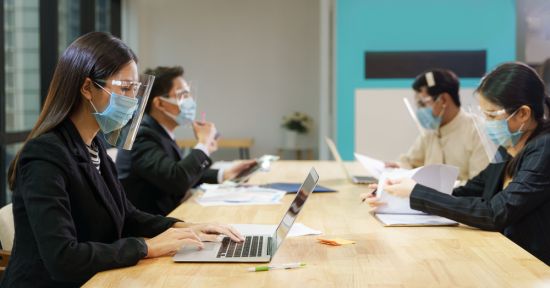 Women in the workplace: Policies to support China's future economic growth should include measures to improve the quality of the labor force (Credit: Mongkolchon Akesin / Shutterstock.com)

Besides improving the quality of human capital and investment in innovative technology to increase productivity, there are other ways to enhance the labor market. Compared with OECD countries, the labor force participation rate has room for improvement. In 2019, the rate in China was only 67 percent, while the OECD average was 78.4 percent. For women the rate was 61 percent, compared with a 65.1 percent average for the OECD. Promoting employment and retraining, particularly for older people, welfare recipients, the disabled and women, would be vital to moderate the decline in the working population.

People might ask whether the Chinese government should abolish its birth-control policy altogether. Beijing is aware that the quality of upbringing may be affected by rural-urban differentials, the educational achievements of parents, ethnicity, economic class, and the varying levels of economic development of provinces. Without some restrictions, the quality of future generations would be diluted. Abandoning birth control could jeopardize government efforts in poverty alleviation, balancing economic development of different provinces, and promoting ethnic integration.

Against this background, unless there are specific policies, including sufficient incentives and support to encourage childbirth in the society and workplace, accompanied by cultural changes in workplaces, families and lifestyles, the prospects of the new pro-birth policies are not promising. Furthermore, to continue its journey to become a high-income economy, China needs to increase social spending and focus on investment in family and children. Quality of human resources is a prerequisite. Reforms in the labor markets are also required to boost labor-force participation. These would include the raising of the retirement age (currently 55 for women and 60 for men), job creation, expanding the economic participation of women, and the implementation of labor-market activation policies to increase the employment rate.

The Chinese government still has to release the details of the three-child policy, together with the complementary family and employment policies and timetables. This time, the emphasis will be on providing facilitating and providing incentives to promote childbirth rather than administering penalties and coercion. It may yet be too early to say that this policy shift is too little, too late. 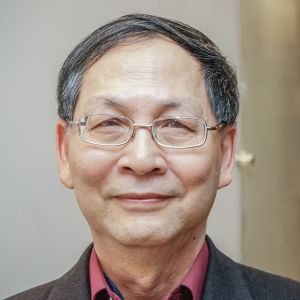 Joe CB Leung is honorary professor in the Department of Social Work and Social Administration at The University of Hong Kong.