The Path to Heliocentrism for China and Europe

Neither scientific progress nor its ability to move society forward is guaranteed. That Earth revolves around the sun seems obvious to us now, but this conclusion came about over 1000 years, taking varying paths in China and Europe. The history of astronomy in these two regions shows us how important political systems are to scientific development. 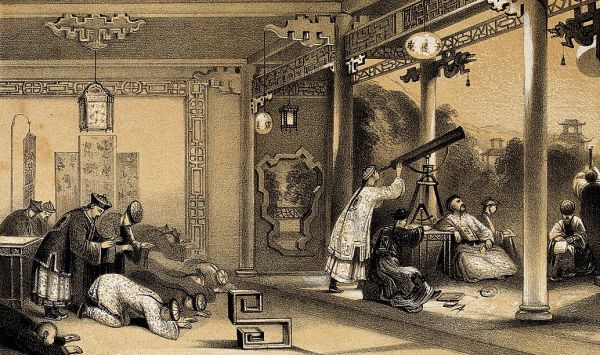 We take it for granted that science always moves us forward. A cursory look at contemporary popular discussions about science, which feature, among other long-debunked issues, climate change denial and creationist theories, should be enough to jolt us out of our complacency. The ability of science to effect change depends entirely on the social and political system under which it is carried out. The history of astronomy in Europe and China shows us as much.

Observing the Heavens in the East and the West

Much like many of us today, our ancestors in ancient civilizations were keen observers of the world above us. Their observations played vital roles in practicalities such as farming and navigation. They knew that, like the sun and the moon, stars traversed the sky in circular paths. However, the same stars did not appear every night: some were seen in the summer and some in the winter.

When our ancestors traveled vast distances, they realized that celestial objects moved differently depending on their observer’s location. The apparent daily path of the sun was more slanted in England than in Babylon. Athenians in Egypt could see the bright star Canopus, which could not be found in the night sky in Athens. These and other observations led to the conclusion that the Earth was round, a fact that the Greeks ascertained around 500 B.C.E. If the Earth were a sphere, then it must be an isolated object in space not attached to anything else. This was an astonishing concept.

The ability of science to effect change depends entirely on the social and political system under which it is carried out.

The ancient Chinese were also careful observers of the heavens. Over the dynasties, hundreds of court astronomers were employed to keep meticulous records of heavenly events. In the Tang dynasty, Emperor Xuanzong commissioned the monk Yi Shin to conduct a comprehensive survey of the height of the pole star from Mongolia in the north to Vietnam in the south. Yi Shin was able to determine that the height of the pole star changed by 1 degree every 131 kilometers along the north-south axis. This result was not consistent with the idea of a flat Earth. Despite this finding, and that the ancient Chinese were well versed in geometry, they did not “discover” that the Earth was round until Western missionaries arrived in China in the 17th century.

When Science Threatens Those in Power

The ancient Chinese had the observations and the mathematical skills, so what was stopping them from coming to the obvious conclusion that the Earth was round? I submit that it was not a question of technical skills, but the constraints imposed by Confucian philosophy on rational thinking. After Confucianism was adopted as China’s official state philosophy in 134 B.C.E., it monopolized Chinese thinking to the exclusion of all other schools of thought. The Confucian hierarchical structure of heaven-earth-emperor-parent-teacher was used to justify the rule of the emperor as the son of heaven. The dominance of the Confucian dogma hindered the development of astronomy in China for 2000 years.

A similar situation occurred in Europe. After the Roman Empire made Christianity its state religion and outlawed paganism in the 4th century C.E., progress in science stalled in Europe for nearly a millennium. The idea of a flat Earth became popular again. And it remained so until the 12th century, when the Arabic versions of ancient Greek texts lost to the West were found in the libraries of the Muslim world. Subsequently translated into Latin, these texts gave medieval Europe invaluable insight into the discoveries of ancient Greek philosophers, scientists, and mathematicians.

The dominance of the Confucian dogma hindered the development of astronomy in China for 2000 years.

In the 13th century, St. Thomas Aquinas reconciled the ancient Greek model of the universe with Christian doctrine, placing hell at the center of a spherical Earth, and heaven outside of a celestial sphere of fixed stars. This cosmological model provided theoretical justification for the ruling tandem of the church and the state, until it was shaken to its core by Copernicus in the 16th century. Copernicus suggested that Earth was just one of several planets to revolve around the sun in a heliocentric system. This model left no place for heaven and hell. The church resisted for a time, but eventually, progress won out.

Three hundred years after Copernicus, the heliocentric theory arrived in China. It was met with severe opposition from Confucian scholars. Soon after the proliferation of this knowledge, the imperial dynasty, built upon Confucian social structures, collapsed.

Throughout history, those in power have always demanded doctrinal conformity. This was the best way to justify one’s rule. But the unstoppable force of human curiosity has, time and time again, brought about unexpected social change.

Today, we face two different challenges: one is government control over information, and the other is the torrent of fake “facts” on the internet. It’s difficult for people to know what to believe. It is of paramount importance that individuals are capable of independent thinking and judgment. It is for this reason that I promote the idea that teaching the methods and processes of science is more important than teaching facts. We should always keep history in mind as we find our way forward to the future.

Sun Kwok is the current president of the International Astronomical Union Commission on Astrobiology. He served as the Dean of Science of the University of Hong Kong between 2006 and 2016. He is the author of many books, including the bestselling "Cosmic Butterflies" (Cambridge University Press, 2001) and "Stardust: The Cosmic Seeds of Life" (Springer, 2013).