Changing the World ... in Small and Creative Ways

Sometimes, the smallest change creates the biggest impact. This is the guiding ethos of Micro Galleries, a global arts initiative that recently completed a community-based project in a Jakarta kampung. Micro Galleries director Kat Roma Greer details her experience with a powerful form of intervention of which funding bodies should take note. 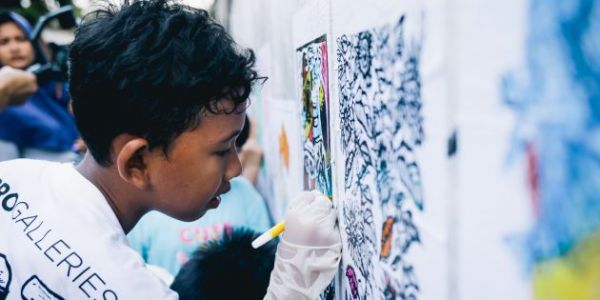 I was always told to make change, loads of change, as much change as I can muster, and make my mark on the world. Growing up in regional Australia during the recession, this seemed like a huge ask. Yet, as it turns out, “change” is exactly the field in which I’ve ended up. I now find myself in Hong Kong, an accidental artistic director and curator of public art interventions; an urban disruptor of sorts who prides herself on performing a type of social acupuncture, using art as a vehicle for positive change, happily making no “big” change at all.

Instead, I harness creativity from across the world to help small villages here and there. And it’s working. I have personally witnessed the incredibly powerful effects of a global community coming together to effect small change in people’s daily lives. It’s simple change but it’s profound, important, necessary, and, significantly under-resourced.

Micro Galleries works exclusively within communities and public places that have been dismissed, forgotten, and present social tension: areas we describe as being in “creative need.”

The idea of Micro Galleries was seeded in 2013, when I began to feel that there was a dire need in Hong Kong to reclaim public spaces and broaden public access to art through free and accessible “disruptive” experiences. From a small pilot program in the area of Tai Hang, Micro Galleries has evolved into a free, global arts initiative that, working over two-week periods, reclaims disused and forgotten public spaces and reactivates them as accessible open-air galleries; using art as a vehicle for positive change, social enquiry, and engaged disruption. 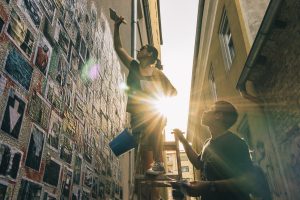 Access to art and the ability to enjoy dynamic public spaces are clearly linked to socio-economic status within many communities. Micro Galleries works exclusively within communities and public places that have been dismissed, forgotten, and present social tension: areas we describe as being in “creative need.” We utilize art, workshops, tours, and talks to explore global and local issues as they pertain to the local communities, including approximately 50% local content and 50% international content. Each project is, importantly, developed with in-depth consultation and collaboration with the local communities, in the hopes of leaving resonant outcomes. We have had nine installations and activities across five continents over a period of five years.

Our recent installation in Jakarta was a culmination of all of these lofty aims and micro aspirations. Thanks to a significant amount of volunteer work, and assistance via public and private funding, we were able to launch Micro Galleries Jakarta in a tiny kampung called Jl. Kebon Nanas I in October 2017. 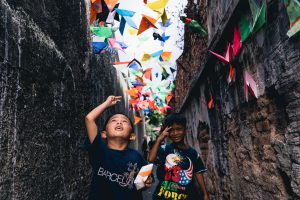 Jakarta has been experiencing a significant social and political transition over the past several years, and this kampung presented a microcosm of the greater shift taking place across the city. A rapidly developing megalopolis, Jakarta is renowned for its pluralism and tolerance, but there have recently been some disturbing attacks on religious, social, and political freedoms.

In this climate, we introduced a foreign-initiated and foreign-founded program with 15 visiting international team members and artists, and a diverse group of artists and team members from across Indonesia, to a devout Muslim community. In all negotiations and discussions, the community made clear that it was not there to be used as a canvas or platform for the advancement of Western artists. We all wanted real engagement and empowerment, not simply an extension of creative colonization.

However, despite two years of collaborative planning and five years of developing a best-practice model for engaging with local communities unused to such initiatives, we still severely underestimated the effect we would initially have on the community. So, upon arrival, we were met with a range of difficulties: logistical, cultural, political, and social.

We all wanted real engagement and empowerment, not simply an extension of creative colonization.

Several small but significant events occurred that brought this disconnect to a head. For example, a truck delivering installation materials hit a wooden bell that had been hanging from an awning, and an artist mistakenly left some materials behind after painting one day. These seemingly small issues created a lot of tension.

At the time, I was genuinely flummoxed. I felt like we had done everything “by the global community book.” Whilst collectively attempting to resolve these issues, a local Indonesian artist advised me to get the women on board. I was incredulous. We had launched a female-focused initiative called “Women on the Wall” and were finding it almost impossible to even access the women in the community. The men of the kampung also found the priorities of the program confusing; its aims, perhaps, unnecessary and an unwelcome comment on the local culture. But as the artist had had much more experience working within these communities, I took his advice, and briefed our artists and team.

From Setbacks to Success

When we returned to the lanes next morning, we made a significant effort to sit and talk extensively with the men in the community about their concerns, whilst making a concerted effort to smile at and engage directly with the women. These were small changes we hadn’t considered applying in quite this way, but as it turns out, they were vital. Later that day, as I was wheat-pasting up an artwork emblazoned with the text “Should a Tolerant Society Tolerate the Intolerant?”, a woman in a head scarf called Fatma unexpectedly took my brush and glue. She then joyfully began to assist with installing the work.

This was the moment when change and real engagement began. Fatma was well-respected in the community. A group of women close to her now had the courage to join us in the lanes, painting and installing works. They began inviting us into their homes for coffee and snacks. Following the lead of their mothers, the children in the community were now creating art, putting up mosaic tiles and painting—even starting their own small workshops in the lanes. 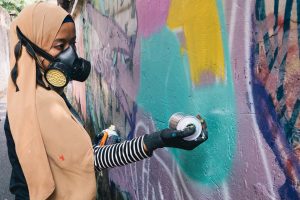 The women in the community set up shops to cater to people who were coming to see the artworks, and their husbands joined them. Locals, outsiders, and internationals were now intermingling at the pop-up warungs (small restaurants), talking and exchanging knowledge. Soon, the kampung residents began to stop us for selfies and assist us in picking up rubbish in the lanes. The wooden bell was painted and proudly displayed. Fatma made the first brushstroke for our “Women on the Wall” project in front of the media and a 100-strong audience, whilst the kampung residents proudly applauded her. She remains my friend.

Due to the success of this initiative, we have been able to pursue new endeavors. We’ve hired two artists for a commission; created a cross-cultural collaboration with Australian and Indonesian female urban artists; and provided professional development opportunities for an Indonesian cultural manager. In addition, the Jakarta Biennale has contacted the kampung for future collaborations, and the young artists within the community continue to create new works and initiatives. 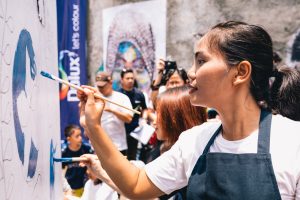 From the micro change we instigate within communities come the macro shifts we hope to see in the world: a willingness to understand, learn, and embrace the values we share and the issues that affect us all.

No book or procedures manual could have told me exactly what we needed to do to realize this outcome. We could only have achieved this small but resonant change by being in and learning with the community. Our success also would never have been possible without access to the resources of international sponsors and public funding bodies. This serves as a lesson for those institutions whose goal it is to have a significant impact in the world. Though it is tempting to lavish funds on more grandiose projects with seemingly greater immediate reach and impact, impactful change on the ground, for the people who need it the most, can only come from this kind of grassroots engagement.

From the micro change we instigate within communities come the macro shifts we hope to see in the world: a willingness to understand, learn, and embrace the values we share and the issues that affect us all. But we can’t do it alone. We need to continue to channel the talent and vision of the global community, and be supported by the institutions that see that small change can make a big difference.

Kat Roma Greer leads the global arts initiative Micro Galleries and is a director of the Sydney alternative arts space The Red Rattler. She is an advisor to the French-based global arts initiative United Sketch Freedom, was named one of Australia’s 100 Women of Influence 2015, and was shortlisted for the University of Sydney Alumni Awards 2016. She is currently based in Hong Kong and works as an urban disruptor and creator of public art interventions that focus on positive social change.