Vietnam’s taking the chair of the Association of Southeast Asian Nations in January 2020 offers a diplomatic opportunity, according to Truong-Minh Vu of the University of Social Sciences and Humanities at Vietnam National University-Ho Chi Minh City. Hanoi, he argues, could push to conclude the negotiations with China for a code of conduct in the South China Sea, which would provide a dispute management mechanism for contentious issues in the region. 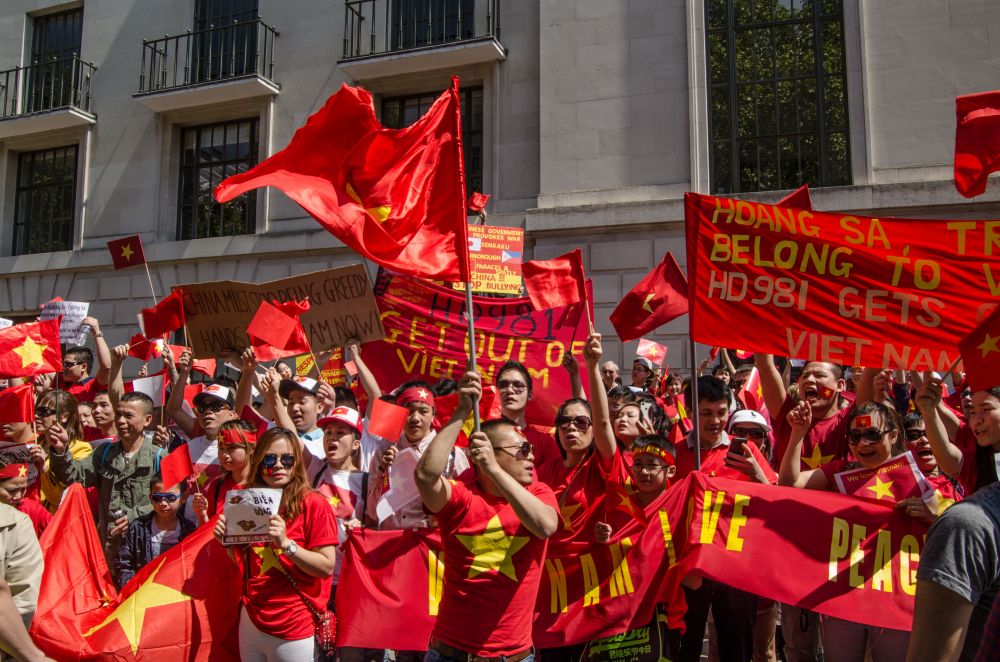 Pressure tactics: Vietnamese protest in front of the Chinese embassy in London in 2014 against China's actions in the South China Sea (Credit: BasPhoto / Shutterstock.com)

The country that chairs the Association of Southeast Asian Nations (ASEAN) – for a 12-month term that rotates through members in alphabetical order – is responsible for coordinating the activities of the group that year. This entails orienting the program and content of meetings, setting themes and priorities, and launching initiatives, as well as managing the relationships among members and dialogue partner countries. One of the most important issues on the agenda in any given year is the maritime disputes over the South China Sea, which is a challenge for intra-ASEAN relations and a test of the framework for the group’s and each country’s relations with the great powers in the region.

In 2020, the role of ASEAN chair falls to Vietnam. For Hanoi, the immediacy of the South China Sea problem was underscored this year when a Chinese oil survey ship and its escort vessels roamed for months inside Vietnam’s exclusive economic zone. This prompted a rebuke from Vietnamese deputy foreign minister, Nguyen Quoc Dung, in a recent lecture in Singapore. “I hope that during our chairmanship China will show restraint and refrain from these activities,” he said. “What China did is very alarming and also kind of threatening not only Vietnam but also other countries that see the potential of being threatened in the future.”

A National Defense Ministry white paper released in November, the first such document for a decade, cited as a matter of concern “new developments” in the South China Sea, including “unilateral actions, power-based coercion, violation of international law, militarisation, change in the status quo, and infringement upon Vietnam’s sovereignty, sovereign rights and jurisdiction as provided in international law”.

Vietnam is not the only claimant country that is shoring up its position. On December 12, Malaysia filed with the Commission on the Limits of the Continental Shelf at the United Nations a submission to assert the limits of its continental shelf in the northern part of the disputed waters. Beijing is reported to have sent a diplomatic protest note to UN Secretary-General António Guterres.

From Vietnamese strategists’ perspectives, the South China Sea is a small piece of the whole strategic picture, which must be viewed in the context of regional and global power shifts. The progress of the South China Sea disputes confounds any prediction. Yet the outcome depends very much on how the parties involved – the six claimant countries and China – decide what matters: power or institutions. For Vietnam and other Southeast Asian states, the commitment must be to institutionalization or producing a workable mechanism to achieve the key objectives – presumably peace, security and stability in the area and maintaining ASEAN’s traditional role as the fulcrum on which the regional balance of power rests.

A key part of coming up with this workable mechanism should be the clarification of the legal regime that would cover the area so as to defuse tensions over territorial sovereignty. Claims over the tiny insular features are not meant to allow countries to gain physical control over these bits of land. Rather, they are intended to assert authority over vast maritime zones that may surround these landmasses – up to 200 nautical miles off.

Control over those waters would include possession of exclusive rights to explore and exploit fishery resources and oil and gas reserves. Such assertions of sovereignty would only be possible if the insular features and other landmasses meet the criteria for being considered islands under the relevant article of the United Nations Convention on the Law of the Sea (UNCLOS). In the case that the Philippines brought against China in the Permanent Court of Arbitration (PCA) in The Hague, the tribunal found that these insular features are merely rocks or low-tide elevations, which means that sovereignty over them does not entitle a claimant to control over the vast waters surrounding them.

Institutionalization should offer the best way to resolve the South China Sea disputes for two reasons. First, there is a power asymmetry among the parties. The conflict is a negotiation between a giant, China, and five smaller ASEAN states – Brunei, Indonesia, Malaysia, the Philippines and Vietnam. Even Indonesia, ASEAN’s largest economy, does not come close to matching China’s geographic size, population, military capacity, or economic power. Second, these ASEAN countries are already well versed in utilizing institutions such as regional frameworks, multinational fora or international adjudicating bodies to assert their positions including when it comes to Chinese power.

1. They explicitly seek to multilateralize and internationalize the disputes through regional and the international forums;

3. Under UNCLOS, the Philippines in 2013 initiated proceedings at the PCA to challenge China's “nine-dash” claim, which covers almost the entire South China Sea.

The latter action was by far the most strenuous use of institutional means to challenge Chinese claims, though Beijing refused either to participate in the arbitration or to recognize the 2016 ruling, which was in Manila’s favor.

Yet over the past three years, the COC discussions between China and ASEAN have been undertaken within the context of the PCA decision. For example, there has been, as a result, more discussion about the potential role of coast guards and some kind of cooperative coast-guard mechanism in the region.

With Vietnam taking over as ASEAN chair, it would be instructive to understand the elements of Vietnam’s institutionalization strategy in the South China Sea. While Hanoi has not gone the route that the Philippines took by going to The Hague (though the government is reported to be considering such action), it has pursued its own efforts to appeal to international law. Vietnam has taken note of the PCA decision that China, through its fishing, oil exploration and construction of artificial islands, had violated the Philippines’ sovereign rights. Hanoi has regarded the ruling as legal precedent to bolster the joint-vision statements for maritime cooperation it has concluded with fellow ASEAN members and regional powers such as Japan.

In building this cooperative network, Vietnam has sought to advance its own maritime interests and to advocate for a more robust multilateral approach to addressing the disputes. There are six crucial points that require consensus among ASEAN countries if the organization is to institutionalize norms of legal behavior in the region. These include:

1. denying the use of force for conflict resolution,

2. unanimity over the utility of international arbitration,

3. mutual acceptance of the freedom of navigation across the exclusive economic zones (EEZs) in the South China Sea,

4. unanimity over the essence of the disputed land features in the South China Sea,

5. the claimant states to frame their cases according to the UNCLOS, and

6. unanimity on the establishment of a multilateral maritime domain awareness architecture (essentially a joint information-sharing mechanism) for the South China Sea.

Winning such a strong and broad consensus would seem a tall order for any ASEAN chair. Could Hanoi forge a solid ASEAN front in the COC negotiations? If the difficulties involved in negotiating the DOC are any indication, it would be a rare and practically unprecedented feat indeed if Vietnam were to overcome the differences and disagreements among ASEAN members to cobble together a working consensus that, in any case, may well be non-binding, as is the ASEAN way.

And then there is of course the US, still the security guarantor in the region, which has become unpredictable and is locked in a trade war and titanic battle for influence in the region with China. Vietnam’s relationship with the US has warmed considerably since the Obama administration but the Trump White House can behave capriciously even with its closest allies. President Donald Trump’s absence from the ASEAN Summit in Thailand in November raised questions about how much of a priority Southeast Asia is on his Indo-Pacific agenda. (Unlike last year when he sent Vice President Mike Pence to take his place, this time National Security Adviser Robert O’Brien attended in Trump’s place.)

Vietnam has chosen “cohesive and responsive” as its theme for its stint as ASEAN chair. “A cohesive and developed community needs to increase its responsiveness to external factors and, in return, responsiveness can only be attained if ASEAN is a strongly cohesive bloc," Prime Minister Nguyen Xuan Phuc said in the ceremony in November when Thailand ceded the chair.

Hanoi should aim to conclude the South China Sea COC negotiations on its watch. If successful, this would be a significant triumph of institutionalization over power. It would also be an assertion of ASEAN centrality, the principle that ASEAN is the positive balancing force in the regional security architecture, at a time of heightened tensions between the major powers.

University of Social Sciences and Humanities

Truong-Minh Vu has been a lecturer at the University of Social Sciences and Humanities – Vietnam National University-Ho Chi Minh City since 2011. He has also been a senior fellow of Indiana University's O'Neill School of Public and Environmental Affairs (SPEA) since 2018. His research has appeared in scholarly journals and policy publications including The National Interest, The Asan Forum, Revista Brasileira de Política Internacional, Global Asia, East Asia Policy, The German Journal on Contemporary Asia, The Asia Maritime Transparency Initiative and RSIS Commentaries. He is co-editor of Power Politics in Asia’s Contested Waters Territorial Disputes in the South China Sea, published by Springer in 2016. 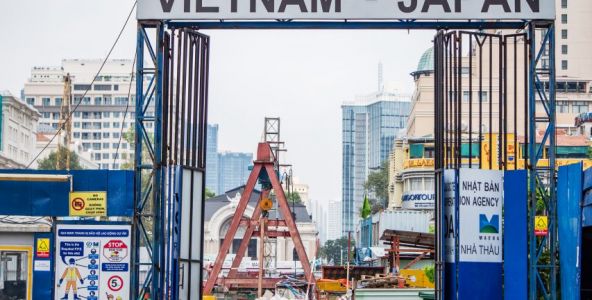