With environmental and societal concerns coming to the forefront of global discussion, adopting green finance is a matter of highest urgency. In Asia, the shift has already begun. Banks, funds, and companies are increasingly building systems for and investing in greener projects. 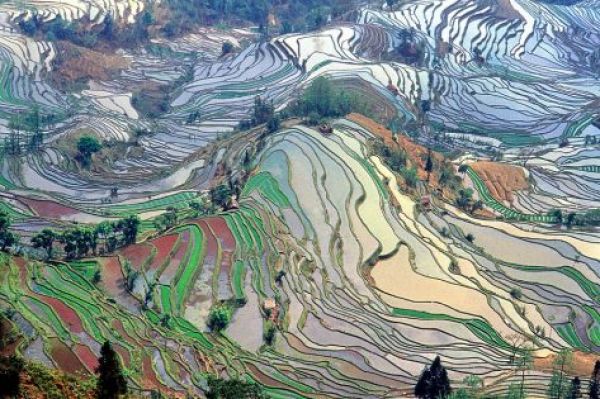 As the global community grows increasingly concerned about environmental and societal issues, governments across the world are gradually transitioning to “green growth.” This involves aligning economic strategy with the need to respond to problems such as energy constraints and water availability. Greater convergence of these financial and environmental policy drivers is transforming global energy markets and creating unprecedented demand for clean technologies and greener infrastructure.

However, notwithstanding the rapid expansion of low-carbon businesses, there is a substantial funding gap between the estimated annual spending requirements for green energy, transportation, and urban development around the world and the actual investment on the ground.

Deployment of “green finance,” an increasingly important sector within the global financial services industry, seeks to address this funding gap. Green finance includes funding for climate-focused and environmentally sensitive investments, as well as practices that embed sustainability more broadly across the economy. In practice, this means that in addition to financial returns, investors and lenders consider the potential impact of their decisions on the environment and society.

Asia is home to more than half of the world’s population, but much less than half of its natural resources. Lasting economic progress in the region depends on Asian countries’ ability to adopt cleaner and more efficient modes of development. As the fastest-growing source of new greenhouse gas emissions, Asia must not only shift away from carbon-intensive businesses, but also prioritize the construction of long-lasting, climate-resilient assets.

The United Nations estimates the scale of investment needed to finance Asia’s transition to a greener economy at about US$2.5 trillion a year. This means that substantial private capital would have to be employed to support limited government resources. Governments urgently need to mobilize both the domestic and international investor communities.

The People’s Bank of China (PBOC) publicly acknowledged this in a meeting in 2015, declaring that China needs to spend more than US$1 trillion annually over the following five years to meet its environmental targets. The PBOC warned that the government has the capacity to finance only 15% of its planned initiatives, while the rest must be funded by private sources.

China’s policy response to this imperative has been considerable. A Green Finance Task Force convened by the PBOC published a report in the same year proposing the implementation of a comprehensive green finance system that would allow China to attract private capital.

While China’s green finance program is perhaps the most extensive in the region, governments and regulators across Asia are also putting in place measures to encourage greater investment in sustainable development and more responsible corporate behavior. For some countries, this means tackling particular challenges in their markets, while others are seeking to implement broader guiding frameworks.

Governments and regulators across Asia are putting in place measures to encourage investment in sustainable development and responsible corporate behavior.

For example, in 2014, the Financial Services Authority (OJK) in Indonesia launched a “Roadmap for Sustainable Finance in Indonesia,” a framework for promoting its own green finance industry. It called for working in collaboration with banks, capital markets, and non-bank financial institutions to develop green financing products, incentives, and lending criteria.

While still at a relatively early stage, OJK’s roadmap is perhaps one of the most systematic plans for financial market evolution in a developing country. It reflects the government’s recognition of the need to reduce its economic dependence on resource-intensive industries (such as mining, agriculture, and forestry) and to direct investment into alternative sectors. OJK has since followed up with guidelines for green bond transactions in the country, and the Indonesian government has become the first in Asia to issue a sovereign green bond.

In addition to pursuing high-profile initiatives aimed at greening capital markets, it is important that policymakers recognize that in most of Asia’s developing economies, the overwhelming majority of funding for businesses and capital works comes from commercial banks.

Bangladesh has taken a lead in introducing green credit guidelines for its banks, as well as incentives to encourage them to lend more to green businesses. Bank Bangladesh, the country’s central bank, provides liquidity support to lenders covering 11 sectors, and will consider allowing favorable equity margin requirements for banks implementing socially and environmentally beneficial initiatives.

The Malaysian government has also placed great emphasis on raising the capacity of local banks to analyze and support green enterprises. Through its Green Technology Financing Scheme, the government plays a key role in providing technical assistance and has catalyzed funding of around MYR 3 billion (US$0.725 billion) across nearly 300 projects in renewable energy, water, and green infrastructure.

Against this backdrop of strong policy signaling from many governments in the region, market interest in greener financial products is also increasing. While it may still be fair to say that many investment professionals in Asia are moving toward more sustainable strategies largely for the sake of compliance with regulation, they are also responding to growing demand from their most influential customers.

In recent years, government pension and sovereign wealth funds have been integrating sustainable principles into their investment processes. Japan’s Government Pension Investment Fund, the region’s largest pension pool with US$1.3 trillion under management, recently announced its intention to raise its allocation to sustainable investments from 3% to 10% of its stock holdings. Public funds in Taiwan, Malaysia, and South Korea have had similar policies in place for some years.

Powerful asset owners like these enjoy enormous influence over investment markets. At the same time, a demographic driver is becoming more apparent. Over the next decade in Asia, it is expected that a significant amount of wealth will transfer to the millennial generation, which appears to be a great deal more socially conscious and environmentally friendly than its predecessors. As these younger clients start to drive investment decisions in the coming years, it seems reasonable to expect an increased flow of funds into greener investments.

The millennial generation appears to be a great deal more socially conscious and environmentally friendly than its predecessors.

Perhaps most encouraging for those seeking to scale up green finance in Asia is the extent to which financial institutions, especially banks, are already identifying tangible opportunities and exciting new business lines related to sustainable development.

In some cases, this appetite has been catalyzed by international expertise and support from multilateral financial institutions. A four-year partnership between the United Nations Environment Programme and India’s Canara Bank and Syndicate Bank, for instance, led to the establishment of a consumer credit market for financing solar home systems in southern India. Similarly, XacBank in Mongolia has been working with the Green Climate Fund since 2016 to increase its ability to make loans to local businesses investing in energy efficiency and renewable energy projects.

Elsewhere, we are seeing the creation of new financial products to meet specific demand from green businesses. For example, OCBC Bank in Singapore recently agreed with Wilmar International, one of Asia’s largest agricultural conglomerates, to link interest rates on a loan to its performance against sustainability metrics.

Innovation of this kind, which establishes a template for others to follow, creates a positive demonstration effect. It delivers evidence to the wider market that green finance is viable and can be commercially lucrative. As more financial institutions recognize the potential for such new business development, they are likely to go beyond compliance on green performance and compete to secure advantage in Asia’s rapidly evolving economic landscape.

Alexandra Tracy is the president of Hoi Ping Ventures in Hong Kong, which she founded to provide research and consulting on sustainable and low-carbon investment in Asian emerging markets. She speaks and writes regularly on sustainable finance, development, and infrastructure issues. She has an MBA from the Harvard Business School and MA degrees from Yale University and Cambridge University.