For the most part, politics in Asia is an old man’s game, with elderly statesmen making the same old speeches urging hard work and patriotism. That augurs poorly for a future in which artificial intelligence and robotics are reshaping the future of work and a global pandemic has put a stop to progress across the region. What is urgently needed, argues Vasuki Shastry of Chatham House, is a mentorship program to develop and guide the next generation of Asian leaders.

Lion in winter, rising star – Mahathir and Nadiem: A generation gap between rulers and the ruled raises the risk that younger generations will feel that their voices are not being heard (Credit left - Abdul Razak Latif / Shutterstock.com, right - Kementerian Pendidikan dan Kebudayaan, Republik Indonesia)

Jack Ma was 35 years old when he founded the Chinese technology company Alibaba. Gojek’s co-founder Nadiem Makarim was only 26 when he launched the Indonesian mobility start-up, and Binny Bansal was 25 when he launched the Flipkart e-commerce site in India. The youthful vigor and drive of three of Asia’s new business leaders is in stark contrast with the region’s aging political leadership. The sad reality in Asia today is that you can be 20 and launch a unicorn, but you would probably have to wait until you are 60 to rise in politics. This yawning gap between rulers and the ruled raises the risk that younger generations, particularly in youth-rich countries in South and Southeast Asia, will feel that their voices are not being heard. The continuing Hong Kong pro-democracy protests are a powerful sign of what can happen next.

Many of Asia’s current crop of leaders were born in the radio and telegraph era of the 1940s and 1950s, with a few exceptions such as North Korea’s Kim Jong-un, born during the Orwellian year of 1984, and Indonesia’s Joko Widodo, known as Jokowi, born in 1961. The generation gap did not matter much when Asia was doing well, with high rates of economic growth translating into tangible gains and mobility for successive generations.

Asia is entering a more uncertain phase with slowing globalization, a Cold War-like escalation in tensions between America and China, and a clear sense among young people that their prospects for upward mobility are likely to be more limited compared with their parents.

What is magnifying the risks is the pandemic, which has caused significant damage by the closure of schools and colleges across Asia and a narrowing in job prospects for the generation entering the workplace. For the hundreds of thousands of Asian students studying in America and Europe, there appears to be no immediate possibility of in-school training for the foreseeable future. The lockdown can feed their anger and frustration in unpredictable ways.

Asian leaders such as China’s Xi Jinping (born 1953), Narendra Modi (1950) of India, and the Philippines’ Rodrigo Duterte (1945) may be very proficient in their use of social media but they do not speak the same “language” of the younger generation in their countries. Their background, rhetoric, culture, and upbringing are from a bygone generation that has all but vanished in Asia. These leaders have also done a terrible job in grooming and projecting younger talent who could reach out to youth and speak about their anxieties and aspirations. Simply demanding that young people stay committed and work hard, which is the usual rhetoric of the political class, does not resonate with the younger generation at a time when the pandemic has become a defining moment in their lives and artificial intelligence and robotics are reshaping the future of work.

It is obvious that Asia should be doing a better job in grooming a new cohort of leaders in politics, male and female. Singapore certainly stands out with the ruling People’s Action Party articulating its “4G” political leadership process a few years ago. Eventually the party named Deputy Prime Minister Heng Swee Keat, who is 59, as successor to Lee Hsien Loong when he steps down sometime during his new term, as he has indicated.

The fact that even Singapore has struggled to groom a younger generation of political leaders does not bode well for the rest of Asia. Neighboring Malaysia went in a different direction in 2018 by selecting the 93-year old Mahathir Mohamad as prime minister for a while – he first assumed that office back in 1981 – and his successor Muhyiddin Yassin is no spring chicken himself at 73 years old and was treated for pancreatic cancer in 2018.

Thailand performed better in the past with the election of Thaksin Shinawatra (who was 50 years old when he took office in 1999) and his political rival Abhisit Vejjajiva was only 44 when he served a brief tenure as prime minister. By contrast, Thailand’s generals who currently rule the country via a nominal election-only democracy are in their 60s.

Over in Japan, new Prime Minister Suga Yoshihide, at 71, is six years older than his predecessor Abe Shinzo, restoring the influence of the over-70s clan in the ruling Liberal Democratic Party, which has long dominated politics. (The US, of course, has its own aging leader issue. In November, Americans are choosing between incumbent Donald Trump, 74, and challenger Joe Biden, 78 that same month, to be their next president.) 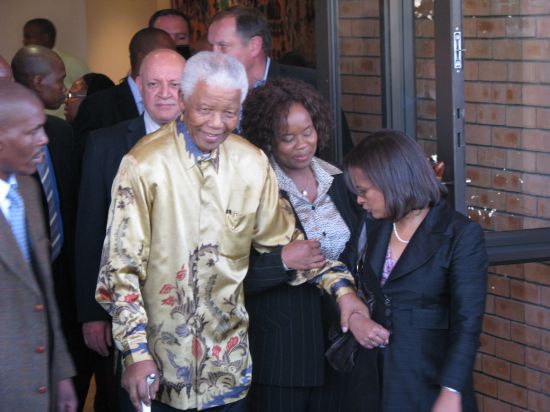 In need of gray-haired mentors: In 2007, Nelson Mandela launched The Elders, an independent group of global leaders working together for peace, justice and human rights (Credit: South Africa The Good News)

How can Asian politics be saved from the gerontocrats and allow a younger generation to enter politics?

In Indonesia, Jokowi is showing the way by appointing Gojek founder Nadiem, who is only 36, as a minister for education and culture. This potentially paves the way for other young professionals to consider a career in politics. In the rest of Asia, there are two significant barriers which cannot be removed in a hurry.

First, politics is still an old man’s or old woman’s game in Asia. Youth is a handicap, and young leaders are expected to serve in the lower rungs for several years before they have a serious shot at the top job. The second reason, perversely, is that most of the young people in politics in Asia are sons and daughters of existing leaders and tend to crowd out new talent from elsewhere. Dynastic politics is one of Asia’s great ills, undermining a country’s political culture and making it the preserve of the few.

All of these factors scare away young Asians from considering a career in politics. It is easier for them to launch a start-up than enter the dirty and dangerous world of politics. This is where a handful of Asia’s respected political statesman – my short-list includes Singapore Senior Minister Tharman Shanmugaratnam (63), Jokowi’s predecessor Susilo Bambang Yudhoyono (70), Modi’s predecessor Manmohan Singh (87), and Malaysia’s perpetual prime ministerial heir presumptive Anwar Ibrahim (72) – could play a significant role by training new political talent and serving as mentors.

Modelled on The Elders, an organization of political émininces grises launched in 2007 by Nelson Mandela, this group should be at the vanguard of grooming new political talent. Their platform should be a political leadership academy, similar to the schools for public policy mushrooming all over the region, with a curriculum focused on public service, citizenship, community engagement, and leadership. The only difference is that the academy should be open to professionals of all ages who are considering a career in politics. There are certain political qualities such as empathy and charisma which are innate and cannot be taught in a school setting. Asia’s Elders, however, could be inspirations, mentors and guardians to a new generation of young men and women who will be ready to take office in the next decade.