The leaders of the ASEAN countries are set to meet in Singapore between April 25th and 28th. With the region feeling the effects of great power competition, it might be time to remember and revive the pacifying role Southeast Asia played in trade, people, and religious exchanges over the centuries. 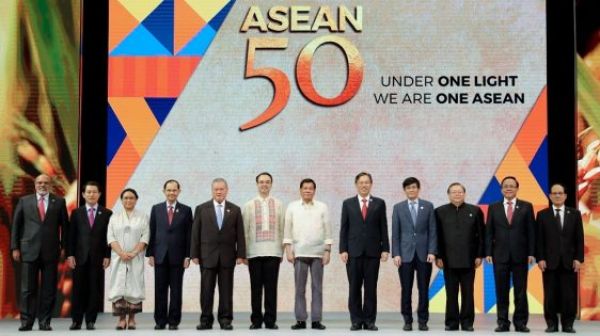 The 50-year-old Association of South East Asian Nations (ASEAN) prides itself on developing an open regional architecture, that brings together many more countries than just its 10 member states. The emphasis on ASEAN centrality is explicitly written in the ASEAN Charter. It should not be seen as a manifestation of conceit or a highly unrealistic ambition to lead a region where India, China, and Japan enjoy much greater resources and capacity. Indeed, ASEAN has already ably played a key role for decades, as the primary convenor of regional fora and meetings. These include the various ASEAN Plus One dialogues, ASEAN Plus Three (with China, Japan, and South Korea), the ASEAN Regional Forum (ARF) since 1994, and the East Asia Summit (EAS) since 2005.

ASEAN firmly believes that only an ASEAN-driven regional architecture would observe the three cardinal conditions that it holds dear. These are maintaining Southeast Asia’s strategic autonomy, ensuring an inclusive regionalism, and preventing any one power or a concert of powers from exerting regional hegemony. In the not-too-distant past, Southeast Asia had been repeatedly used as the primary theater of competition and conflict among the major powers. Thus, ASEAN believes it must take a proactive role in managing its relations with external powers to ensure the sub-region’s security and stability.

ASEAN's ability to manage relations with the major powers and even to ensure Southeast Asia’s strategic autonomy has been increasingly challenged in recent years.

Geopolitical rivalry between the United States, as the incumbent superpower in the region, and China, as an ascendant great power, threatens to pull ASEAN members in opposite directions.

The rapid rise in China's economic and military might and its progressively assertive policy in securing its claim over the whole of the South China Sea—parts of which are also claimed by Taiwan and ASEAN’s Brunei, Malaysia, Philippines, and Vietnam—have undermined ASEAN unity over the issue.

This fact was clearly demonstrated in an unfortunate incident in 2012, when for the first time in its history, ASEAN failed to issue a joint communique at its semiannual summit. Summit host country Cambodia, at the behest of China, opposed the inclusion of a passage critical of China in the draft of the communique. Geopolitical rivalry between the United States, as the incumbent superpower in the region, and China, as an ascendant great power, threatens to pull ASEAN members in opposite directions.

Despite these fundamental weaknesses, one must acknowledge that there is no better viable alternative to ensure the development of an open, inclusive, and collaborative regional architecture that would be acceptable to all stakeholders. A regional architecture that is initiated and dominated by one or more major powers and that seeks to exclude rival powers would not be acceptable or sustainable. The history of Southeast Asia throughout the 20th century provided valuable lessons on this basic reality.

Southeast Asia is a highly diverse region with differences in historical experiences, religions, cultures, political systems, levels of economic development, and strategic orientations. Rather than looking at its underlying diversity as a weakness, we must begin to appreciate that ASEAN's openness, its willingness to engage with different external powers, and its basic cosmopolitanism have been made possible specifically by its diversity. ASEAN member states cannot easily look at the world in a dichotomy of "us" versus "them," as variants of "them" can also be found within the diversity of Southeast Asia and thus are integral parts of "us" as well.

There is no better viable alternative to ensure the development of an open, inclusive, and collaborative regional architecture.

Diversity in Southeast Asia does not only exist between countries, but also within countries. Hinduism, Buddhism, Confucianism, Islam, and different variants of Christianity are all well represented. Except for Christianity, which followed European colonialism between the 17th and 20th centuries, in most cases, these religions were spread peacefully through trade. Southeast Asia's strategic location along the maritime trade route between China and Japan in the north and the West, as well as its production of much sought-after rare spices and woods, made the region a hub of early globalization. Southeast Asian merchants, rulers, and states played a central part in the trade that flowed from and through their region.

The people of Southeast Asia did not simply absorb and copy ideas from outside, but refined them and made them unique. Subsequent centuries of colonial rule by different European powers separated the Southeast Asian countries from each other and ended the region’s earlier position as a global hub for peaceful exchanges of goods, services, and ideas. However, Western colonialism was also the primary driver in the emergence of modern nation-states in Southeast Asia, the very ones that now make up ASEAN.

As we ponder the challenges that ASEAN faces in ensuring its centrality, it is worth remembering the history and best practices that spoke to Southeast Asia’s openness and ability to engage as equals with all comers. To quote Anthony Reid, “As South East Asians dramatically shape their present, they need not be inhibited by their immediate past …. An earlier period offers abundant evidence of creative responses to rapid economic change, a variety of social forms, a variety of political and intellectual possibilities.”

Dewi Fortuna Anwar is a research professor at the Center for Political Studies-Indonesian Institute of Sciences (P2P-LIPI). She has written extensively on Indonesia’s foreign policy, Indonesia’s democratization, as well as on ASEAN. She obtained her PhD from Monash University and her MA and BA (Hons) from SOAS, University of London. She is a member of the editorial board of "AsiaGlobal Online."