Can America Bounce Back in Asia?

In tandem with China’s rise, America's geopolitical predominance in Asia has been waning, and this decline in influence has accelerated under the presidency of Donald Trump. Looking further ahead, however, it is not obvious that this "new normal" will be sustained in light of America’s deep economic and security interests in Asia and China’s fundamental fragilities. 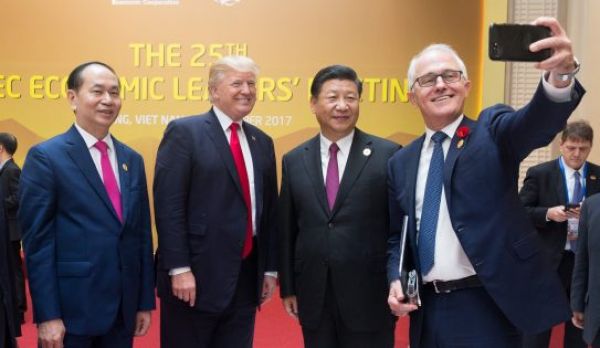 In the aftermath of World War II and the Korean War, the U.S. planted the seeds for an “Asian century” to be realized in the 21st century—as well as for its own hegemony in East Asia. It remade Japan, its archenemy, into a democracy with a pacifist constitution. It offered security alliances and partnerships to Japan, South Korea, the Philippines, Taiwan, Thailand, and Singapore—the U.S. still has a combined 80,000 troops stationed in Japan and South Korea. It provided financial assistance to rebuild war-torn economies. America’s open markets enabled these countries to pursue export-driven development. And the postwar liberal international order led by the U.S. underpinned an open and secure international system that facilitated Asia’s development.

When China began opening up its economy in 1978, the U.S. was there to welcome Chinese exports, students, migrants and, more recently, investors. China’s economy would experience dramatic growth following its entry into the WTO in 2001, which was supported by the Clinton administration and American business community.

China has since progressively displaced the U.S. as the main trading partner of many Asian countries, building the foundation for its growing geopolitical clout in Asia in the process. China is also an increasingly important investment partner and provider of foreign aid in Asia. And recent Chinese initiatives like the Asian Infrastructure Investment Bank (AIIB) and the Belt and Road Initiative (BRI) are only strengthening China’s position as a regional power. But concerns are being raised about how beneficial China’s infrastructure cooperation really is, as projects tend to involve mainly Chinese workers and material input. In addition, China’s partner countries run the risk of being left with large debt burdens.

At the same time, China and other Asian countries have become major economic partners for the U.S. Some 60% of U.S. trade is now with the Pacific region, which means that Asian maritime and regional security are vital U.S. interests. Japan and China are the biggest foreign holders of U.S. Treasury securities. Students from China, India, and South Korea account for over half of the total foreign student population in the U.S.  Japan, China, and South Korea are among the top 10 source countries for foreign tourists in America, and Asians are now the fastest-growing migrant group in the U.S.

In his "pivot" to Asia, former U.S. President Barack Obama promised the nations of Asia “a new era of engagement with the world based on mutual interests and mutual respect.” Obama's pivot contained two main components: shifting some military focus away from the Atlantic and towards the Pacific; and the Trans-Pacific Partnership (TPP), a high-standard regional trade deal.

Some 60% of U.S. trade is now with the Pacific region, which means that Asian maritime and regional security are vital U.S. interests.

Overall, the Obama administration achieved mixed results in its efforts to rebalance America’s profile in Asia. The pivot seemed to reflect a desire to “contain” China, and may have actually provoked China’s subsequent assertive behavior, notably in the South China Sea. Additionally, Obama’s decision to undermine and boycott the Chinese initiative to create the AIIB, which has been embraced by many Western and Asian countries, is now seen as a blunder.

Obama also oversaw a cooling of relations with several Asian countries, namely: Thailand after its 2014 military coup; Malaysia as its sovereign wealth fund 1MDB became embroiled in a corruption scandal; and the Philippines following criticisms of human rights abuses in President Rodrigo Duterte’s war against drugs. Beijing has since been able to court these countries with generous trade, investment, and aid packages. On the other hand, Obama cultivated friendly relationships with Manmohan Singh and Narendra Modi, the two Indian prime ministers who overlapped with his presidency. Economic and military cooperation also strengthened greatly between the U.S. and Vietnam.

Donald Trump and the Waning of America's Geopolitical Predominance in Asia

China was the whipping boy of Donald Trump’s presidential campaign. His working assumption seems to be that China and other Asian countries have been ripping off America. Asian leaders are quite used to bombastic comments being made during the hurly-burly of U.S. election campaigns, only to be followed by moderate approaches to policy after the dust settles. But Trump has abandoned the ambition for the U.S. to be the generous and friendly hegemon of Asia, one seen as an effective counterweight to China.

Upon taking office, Trump immediately withdrew the U.S. from the TPP, and has since implemented trade-protectionist measures. To the great disappointment of the international community, Trump has also withdrawn the U.S. from the Paris climate agreement. China and the EU are now positioning themselves as global leaders in the fight against climate change.

Trump has abandoned the ambition for the U.S. to be the generous and friendly hegemon of Asia, one seen as an effective counterweight to China.

Trump’s foreign policy has been most chaotic when it comes to North Korea, with comments by the administration oscillating wildly between advocating military intervention and regime change, and proposing dialogue and diplomacy. This approach may have actually been successful in bringing Kim Jong-un to the negotiating table, with Trump and Kim tentatively scheduled to meet in May 2018.

It is difficult to speculate on the possible outcomes of this meeting. However, it is unlikely that Kim would agree to give up his nuclear and missile programs without major concessions from the U.S. side, such as the removal of all U.S. troops from the Korean peninsula, a move that would be resisted by South Korea and Japan, not to mention many in America itself.

Is It All Set in Stone?

The 2016 U.S. presidential election and the turmoil of the Trump administration have greatly undermined the credibility of the U.S. as an indispensable strategic power in Asia. Its moral ascendancy and soft power are greatly diminished. To some, China appears to be a much steadier and effective hand on the international stage, even though its economic, political, and military power is dwarfed by America’s. In short, China seems to be becoming the paramount power in Asia.

Looking at the long term, this waning of America’s geopolitical predominance in Asia may not be permanent.

This does not, however, augur well for the prospective Asian century. China is not a promoter of open markets (despite President Xi Jinping’s fine words), good governance, and international rule of law, key elements for realizing an Asian century. Rather, state capitalism, authoritarian governance, and Sinocentric bilateralism are China’s currency. Indeed, many Asian countries are very keen for the U.S. to remain in Asia and balance China’s growing geopolitical influence.

Looking at the long term, this waning of America’s geopolitical predominance in Asia may not be permanent. Trump will not be in office forever, and the next administration may well have a more enlightened approach to relations with Asia, especially in light of America’s strong economic and security interests in the region. It is important to recall that America has seemed to be in inexorable decline in the past, only to rebound spectacularly—such as following the Vietnam War, and after economic and technological challenge from Japan in the 1980s. America’s economy and political system have often demonstrated amazing resilience.

China itself is beset with a host of challenges: its massive debt, demographic decline, and weak productivity growth. And it is far from clear that its renewed authoritarian model under Xi will take the country in a positive direction.

John West is the author of the recently published book "Asian Century ... on a Knife-edge — A 360 Degree Analysis of Asia's Recent Economic Development." He is also an adjunct professor at Sophia University in Tokyo, contributing editor of "FDI-Intelligence," a "Financial Times" magazine, and the executive director of the Asian Century Institute.