AI and Emotions: The Next Frontier in the Social Sector

Artificial intelligence (AI) is a disruptive technology that is changing the way we live and work, with machines augmenting human activity. But AI for making business profits cannot also be deployed in the social sector, where maximizing social impact is the primary goal, writes Samir Sathe, India country leader of the Silicon Valley-based Wadhwani Foundation’s Advantage program. He argues that the key to successful use of AI to meet social needs is to develop algorithms that understand emotions. 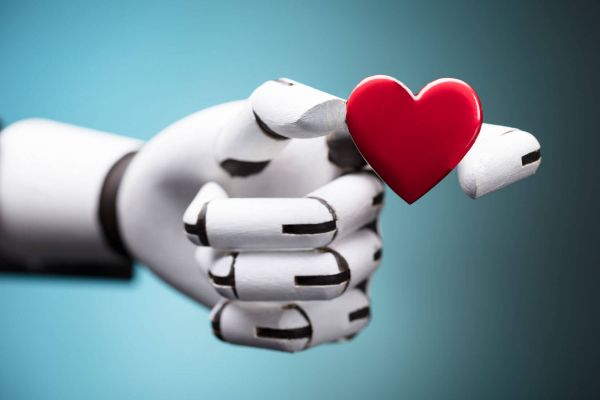 What happens when the Fourth Industrial Revolution collides with the need and desire to improve the state of the world? To be more specific: What impact will artificial intelligence (AI) have on the social sector? The answer depends on the reply to a bigger, deeper question: What ultimately does AI need to solve?

The social sector may be defined as an ecosystem where resources are shared for the purpose of helping others rather than only for the benefit or profit of one person or a group. Actors in the sector are expected to ensure that people create and share resources equitably or fairly to the broadest extent possible. There is conflict when the creation or distribution of these resources is skewed. When the structural advantages of resources are complemented by human capability to great effect, we experience peace and happiness. When resources are unfairly created or distributed, we are disturbed and unhappy.

The trading of resources began before the invention of money with barter exchange. With the advent of money, which standardized the value placed on resources, trading became easier, faster and bigger. Greed driven by the desire to make more monetary profit than others entered the process, creating the element of competition – sometimes to an unhealthy level – and the fight for resources to generate yet more profits.

The advent of money also created conflict when traders attempted to grab a larger share of the resources pie to grow economically, not only to satisfy their needs but also to do something more with those resources, i.e. “adding value”. This involved selling a modified form of these resources to others. It was the motive to gain from trade that prompted traders to become producers, giving birth to markets and capitalism.

The social sector has been around in different forms for centuries and is not driven by the profit motive. Socialism, as a political and economic theory of social organization, rests on the notion of sharing resources equally but not necessarily equitably, if viewed through the capitalist lens. Altruistic sharing is the kernel of social goods and services.

Let me use the concepts of destructive and constructive interference from physics to explain further the inherent conflict between trading and sharing resources as practiced in the business world and the social sector, respectively.

The ongoing trade wars and the move towards protectionism by developed countries are symptomatic of the conflict between trading and sharing resources. The race for profit and economic prosperity has driven intense competition among the corporations. The outcome is clear. Destructive interference puts the benefits of constructive interference at risk. Trading usually takes precedence over sharing.

The role of AI

With the application of AI to doing business and to the social sector, there would seem to be an inherent conflict between the goals of trading resources to maximize profits and sharing resources for optimum social impact.

How is AI being applied to the achieve the greatest social impact whether in the context of a commercial organization, social enterprise or NGO?

There are efforts in the social sector to use AI technology to enhance the quality of human life and the sustainability of the environment. Take the initiative I lead, Wadhwani Advantage, a flagship program of the Wadhwani Foundation. We are using AI in our mobile technology platform to give thousands of small businesses access to knowledge and link them with advisors who can help them solve their market challenges, creating millions of jobs in developing economies.

The Wadhwani Institute for Artificial Intelligence, or Wadhwani AI, is also building applications aimed at the promoting the health of mothers and the new-born. It is developing smartphone-based anthropometry technology which will allow frontline workers to screen for low-birth weight babies in rural homes. This AI-powered virtual weighing machine will provide accurate, tamper-proof, geo-tagged measurements using a smartphone without additional hardware or data connectivity. The technology, no doubt, would help humankind address the problem of low-weight babies.

There are several examples of businesses which are to tackle social problems. Consider Boond, which providing access to clean energy (solar) to schools in the remotest areas of India. Or Jayalaxmi Agro Tech, which is breaking literacy barriers to provide timely and accurate information to farmers using data analytics and AI.

In their paper “Notes from the AI Frontier: Applying AI for Social Good”, McKinsey Global Institute authors offer several cases of how AI is being used to help the visually impaired better navigate their environment, to diagnose skin cancer from mobile phone photos, to improve financial inclusion in developing economies, to spot and stop poachers using drones, to detect water service lines containing lead, and to analyze satellite data to help cope with the aftermath of natural disasters. These attempts to solve social problems are being made today but there are significant challenges to overcome including the availability, accessibility and quality of data, as well as the lack of AI expertise and practitioners.

Today, AI is making the trading of resources more intelligent and efficient. If one thinks of the adopters of AI who are focused on profits as moving out of sync and creating destructive interference, the result is outcome waves that cancel out – a flat line. Now, in the social sector, where the objective is to share resources better, the waves are more likely to be perfectly synchronous, resulting in deeper and broader social impact.

While AI is disrupting the social sector, it cannot do so in the same way that it is disrupting trade and commerce. This means reimagining code that is not about trading resources better but about sharing them in a fair and equitable way. In the corporate context, this requires corporate social responsibility to be a priority rather than an afterthought.

The application of AI in businesses allows machines to supplement, complement or substitute for humans in making optimized economic decisions that result in better commercial performance that leads to faster wealth creation that lasts longer. AI is today mainly driven by capitalist motivations. This makes the adopting of AI in the social sector more difficult.

Performance orientation is driven by profit seeking and an emphasis on productivity or competitiveness. Sharing speaks to a fundamental human emotion – love. Can these two approaches be reconciled? If one casts a look at the applications of AI and even current attempts to build artificial emotional intelligence (AEI), the end goal is to make sound decisions that lead to better economic gains – not to feel good or loved! Therein lies the disconnect.

The social sector - the new frontier

AI needs to redefine what it is aiming to solve in the social sector. It is not enough to make better decisions for the future of human kind for social enterprises, philanthropies, or CSR entities. We need to question the grand purpose of AI in the social sector. It calls for asking three seemingly unrelated but, deeply connected, questions about how to align AI with the emotions that lead to acts of giving and sharing.

It is not about love alone. The range of emotions that govern human behaviour define the very existence of the social sector. While enhancing competitiveness is important for motivating a firm focused on increasing shareholder value to scale up and attain greater impact, that is not what inspires a social enterprise.

AI must delve into measuring and analyzing emotions. There are indications that this is happening Companies such as Affectiva, BeyondVerbal and Sensay are providing plug-and-play sentiment analysis software. Several smaller firms are taking notice but are shy of the level of investment that could move the needle. The affective computing market is estimated to grow to US$41 billion by 2022, as firms like Amazon, Google, Facebook and Apple race to decode their users’ emotions. The concept and practice of AI for Social Good (AI4SG) is gaining momentum in the AI community and its users. The Digital Ethics Lab at the University of Oxford Internet Institute and the British government’s Alan Turing Institute in London are doing interesting work in this domain.

In the social sector, the AI community must reorient from focusing on performance to the emotions that drive the giving, sharing and receiving of resources. Assessing these sentiments are the metrics that will matter. Is this possible? Given the pace of technological innovation, it is reasonable to assume that AI will eventually have emotional intelligence. “The paradigm is not human versus machine,” the Egyptian-American computer scientist and entrepreneur Rana el Kaliouby said. “It’s really machine augmenting human. It’s human plus machine.”

What does AI want to solve to maximize social impact? The answer: to understand the emotions that drive giving and sharing.

Samir Sathe is the executive vice president of the Wadhwani Foundation and the Mumbai-based India country leader of the Foundation’s Advantage program. Headquartered in Silicon Valley, the Wadhwani Foundation is a global philanthropic organization active in 20 countries. Its mission is to create jobs and change lives. The Advantage program focuses on helping small businesses build scale faster and increase employment opportunities by using artificial intelligence-enabled mobile platforms. Samir has 25 years of experience in research, strategy and transformation consulting in India, Singapore, the Middle East, UK and the US.