The Asia-Pacific population has been undergoing dramatic aging, which is transforming the region’s demographic landscape beyond recognition. The region is currently ill-equipped to meet this critical challenge, particularly due to a lack of sound and efficient pension systems. 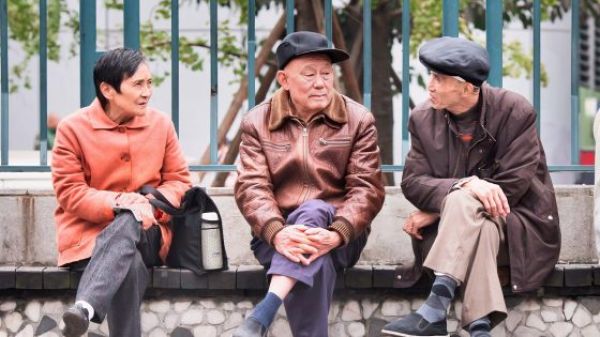 The past few years have seen workers in Asia becoming increasingly restive and concerned over pensions. Demands for reform have erupted into street protests in China, French Polynesia, India, New Zealand, and everywhere in between. The Asia-Pacific has a relatively young population with a high ratio of workers to dependents—i.e., children and the elderly—and this has contributed substantially to the region’s sustained rapid economic growth in the past few decades. However, the number of retirees per worker has been increasing in recent years and economic security for the elderly looms on the horizon as one of the region’s most significant strategic challenges.

As a result, Asia-Pacific economies have seen rapid growth in pension assets in the past several years. The assets of regional pension funds rose 20% in 2017 to almost US$5 trillion, outpacing the global rate of 15%. Four Asia-Pacific funds—from Japan, South Korea, China, and Singapore—are among the 10 largest in the world, while 2017 saw the first India-based retirement fund make its way into the top 20.

However, as Bank of Japan Governor Haruhiko Kuroda said at a G20 meeting on January 17, 2019, the challenges posed by an aging population remain a key issue facing the region.

The current global pension deficit is around US$70 trillion—compared with a global gross domestic product of just over US$80 trillion—and is expected to rise to US$400 trillion by 2050. Much of this comes from Asia: China and Japan's pension funding gap is about US$11 trillion each. This article describes the main Asia-Pacific pension systems and compares eight East Asian countries—China, Indonesia, South Korea, Malaysia, the Philippines, Singapore, Thailand, and Vietnam. 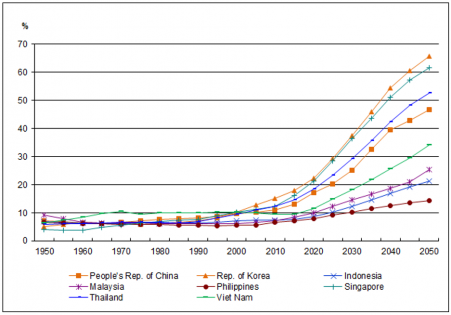 The Function of Pension

Defined broadly, “pension” refers to an annuity or lump sum of cash received by an individual upon their retirement. A strong pension system should cover the largest possible share of a population and provide adequate retirement income—and, do both while remaining affordable. At a broader level, there is a great deal of heterogeneity among pension systems even though they share universal goals. For Asia, the biggest strategic choice in pension system design is how much risk individuals should bear and how much risk society should pool together.

The current global pension deficit is around US$70 trillion—compared with a global gross domestic product of just over US$80 trillion.

For example, under a defined contribution (DC) pension plan, the individual must bear their own risks. In contrast, under a national defined benefit (DB) pension system, the government pools together individual risks and bears the risks on its citizens’ behalf. At present, most pension systems are a mix of social risk-pooling and individual risk-taking. Some pension systems prioritize the former, others prioritize the latter, and yet others balance the two more or less evenly. However, the shift from DB to DC can be problematic. In Uttar Pradesh, the most populous state in India, pensioners who received a guaranteed minimum of Rs9000 (US$126) per month under DB found that under DC, their monthly payments could fall to Rs700 (less than US$10). This sparked violent protests in November 2018.

A central parameter of any pension system is the retirement age. This varies greatly among Asian countries and is lower for women in some countries. A pensioner receives pension payment from retirement until death. The larger the gap between life expectancy and retirement age, which varies substantially across Asian countries, the larger the liabilities of the pension system. Due to rising living standards and improving medical care, life expectancy and retirement age are both expected to rise rapidly. In January 2019, Indonesia’s retirement age rose from 56 to 57, and will gradually extend to 65. Recently, a number of governments—including those of several Indian states and Mongolia—have sparked protests after lifting retirement ages.

While the government rather than the private sector runs the national pension systems of all eight countries in this study, the basic frameworks of their pension systems vary greatly. Some countries have DB systems while others have fully or partly DC systems. DB systems are generally not prefunded, in contrast to largely prefunded DC systems. Only three of the eight countries explicitly seek to redistribute income from the rich to the poor.

Who Bears the Risks?

The rules for calculating benefits vary widely across the four countries with DB systems. Salary measures used to compute benefits vary, as do the indexation of benefits and pension eligibility requirements. Estimates from the OECD show that for an average earner, DB replaces 67.3% of income in Vietnam, 47.1% in Thailand, 39.6% in South Korea, and 37.7% in the Philippines. The corresponding figure for China’s basic pension is 77.9%. 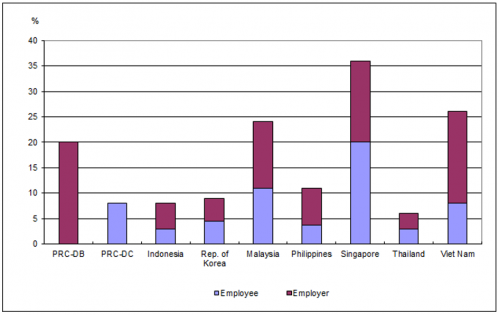 The pension systems of Indonesia, Malaysia, and Singapore are skewed toward individual risk-taking. These three countries are unique in the region for explicitly rejecting the social insurance principle, reflecting societal preference for individual risk-taking. Singapore’s Central Provident Fund and Malaysia’s Employee Provident Fund were set up to encourage saving for retirement. Both countries have high national saving rates due to the provident funds. But Indonesia’s pension system pays accumulated savings as a lump sum payment, and due to its recent introduction, low wages, and low saving rates, this amount is not adequate for retirement income. Only one Indonesian province, Aceh, has a universal social pension and, as a result, has sharply reduced old-age poverty. Indonesia has a long way to go to catch up to its neighbors.

For Asia, the biggest strategic choice in pension system design is how much risk individuals should bear and how much risk society should pool together.

The pension systems of the five other countries are characterized by significantly more social risk-pooling. In particular, their main pension systems are primarily DB systems. The capacity to effectively implement a social insurance system varies greatly among the five countries. Social insurance is a broader concept than pension because it is a public insurance program that provides protection against not only loss of income due to old age, but also other economic risks—for example, sickness and unemployment.

At one end, South Korea offers its citizens a comprehensive social security system similar to those of Western countries. In contrast, Indonesia has only recently instituted a social insurance scheme to complement its DC system, which means that its pension system is moving toward a better balance.

China has a redistributive basic pension as its DB system while Indonesia is in the midst of a shift from a DC system to a mixed system. As a result of evolving societal preferences toward stronger social safety nets, Indonesia’s new mixed system takes into account the social insurance principle. None of the region’s DB pension systems, which are predominantly pay-as-you-go, has substantial prefunding, with the sole exception of South Korea. 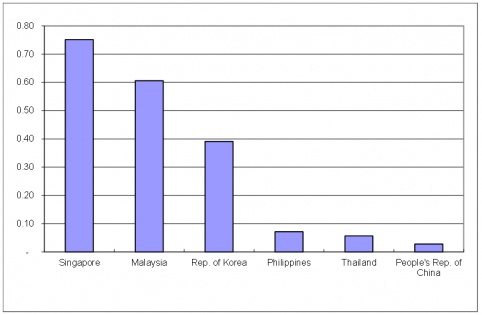 Reform Is of the Essence

Population aging makes it imperative for Asia to develop well-functioning pension systems capable of protecting older Asians from poverty. The eight countries we examined are extremely diverse, in income and development levels as well as the soundness and effectiveness of their pension systems. Therefore, the constraints and preferences of old-age income support systems differ a lot from country to country.

Despite country-specific needs, there are nevertheless some reform directions applicable to the whole region. These include (1) strengthening institutional and administrative capacity, (2) improving governance and regulation, (3) expanding coverage, (4) enhancing financial sustainability, (5) enhancing returns from pension assets, and (6) protecting the elderly poor. Pension reform is a difficult process that requires political will and commitment, as well as concerted communication with the public, but the alternative—failure to reform—will be far more costly for a rapidly aging Asia.

Donghyun Park is a principal economist at the Macroeconomics and Finance Research Division, Economics and Research Department, at the Asian Development Bank.