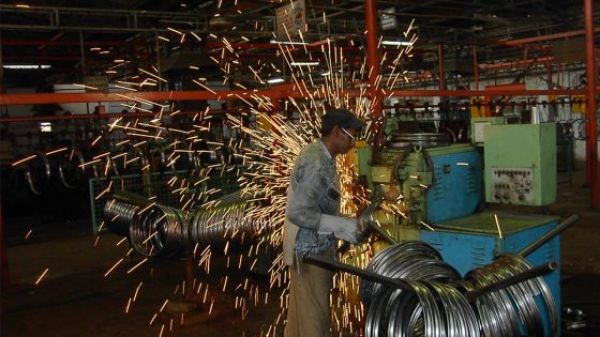 Make In India: Can a bolder Modi bring sparkle to the country's manufacturing sector? (Credit: ILO)

The election victory of the Bharatiya Janata Party (BJP), led by Prime Minister Narendra Modi, was extraordinary and unexpected. Opinion polling and recent state election results had led most observers to predict that the BJP would lose its majority in the Lok Sabha, the lower house of Parliament. Instead, the party gained seats, taking 303, well past the winning post of 272, not even counting constituencies won by its allies in the National Democratic Alliance (NDA). A second consecutive absolute majority for a single party is unprecedented since the heyday of the Nehru-Gandhi Congress Party dominance of post-independence India. It is a singular triumph for Modi himself.

Modi’s first electoral win in 2014 resulted from his promise that he would deliver acche din, good days. His was a victory of aspiration for India’s economic potential after a period of drift under the previous Congress government. He undertook to deliver firm but clean governance, growth and job creation, as he had managed to do as chief minister of Gujarat. He was pro-business, stating, “I believe government has no business to do business. Minimum government, maximum governance.”

The BJP’s economic track record in the 68-year-old Modi’s first term disappointed, especially given the vaunting rhetoric to which Modi is prone. He promised good days and abundant job creation, but the reality was rather different. GDP growth averaged 7.2 percent, not significantly higher than the 6.4 percent average growth achieved by the much-mocked predecessor government led by economist Manmohan Singh. India became the fastest-growing large economy, as China slowed, but many were surprised by the lack of fundamental reforms. The boldest move was the quixotic demonetization of 2016 when overnight all large-denomination banknotes were withdrawn in an economy in which cash dominates, causing widespread disruption.

Among growing disillusionment as the 2019 election approached, farmers and young jobseekers felt particularly let down. Rural angst resulted in the poor showing for the BJP in critical state elections at the end of 2018. A leaked employment survey, held back by the government, was reported to show that unemployment, especially among the young, was at record levels at 6.1 percent.

The business community remained more supportive of Modi as an economic manager. While the government appeared short of a convincing and differentiated economic strategy, it did implement a series of long-discussed measures for which there was broad consensus, but which had been held back through paucity of political will. A national VAT, the GST, was implemented in 2017, much simplifying the movement of goods across state borders and making it much harder for small businesses to evade the tax net.

Meanwhile, investment in infrastructure was ramped up with tangible progress made in critical areas such as electricity supply and road construction. A new bankruptcy system was implemented, meaning that for the first time there were consequences for those who borrowed excessively and assets could now be repurposed after insolvency. There was a genuine effort to deregulate the economy and reduce the corruption that resulted from all the red tape. Modi announced a target of getting into the top 50 group of countries on the World Bank’s Ease of Doing Business Score. In 2018, India was ranked at 77, up 23 places from 2017 and 53 spots above its 2016 performance. (China, by comparison, was ranked at 46 in 2018.)

These were solid, if not spectacular, achievements. Modi’s challenge was that the levers available to a federal government are quite limited in a system in which the 29 states control many policy areas. For much of his first term, the BJP struggled to pass legislation as it did not yet have a majority in the Rajya Sabha, the upper house of Parliament. Further, Modi’s style is to centralize decision-making on himself and to work with a few trusted officials, undercutting other cabinet ministers, whose quality was in any case mixed at best. Modi appears reluctant to delegate and prone to undermine any alternative centre of decision-making. Two competent governors of the Reserve Bank of India (RBI), the central bank, were essentially forced out for not toeing the Modi line.

The result has been that it has been easier for Modi to announce programs and make promises than to deliver. For example, the Make In India initiative aims to reverse the decline of industry as a percentage of GDP and attract investment in job-creating manufacturing. The timing is good as costs in China have risen, making India an increasingly attractive manufacturing hub given its market size and growth, low labour costs and high managerial and engineering skills. The US-China tariff war has spurred the move of some manufacturing operations out of China to alternative locations. Yet the Make In India policy has had only limited success and industry remains just 15 percent of GDP. Despite recent improvements, it remains laughably hard to create and operate a manufacturing operation in India, given the challenges of land acquisition, the complexity of regulatory clearances, the draconian labor laws and the sub-standard infrastructure.

Take textiles as an example. India should become one of the leading sources of garments globally due to its strong textile tradition and low costs. Yet Bangladesh has succeeded in building an export-oriented garment industry worth $30 billion, more than three times the size of that in India.

Modi underperformed his economic promises in his first term and wasted an historic opportunity of an unusual majority government. He has now been handed a second chance by the electorate. What might be different in the second term? How might he lift 7 percent growth to nearer the 10 percent that is possible and required to deliver jobs for the young population?

First, Modi must move swiftly and take tough decisions early in this Parliament. In 2014, his incoming administration seemed as surprised as everyone else to be in a majority government and spent too much time developing a policy program. This time round, there are no such excuses and the government can now pass legislation through both houses. Make change early and boldly.

Second, Modi should appoint much more competent people to key ministerial and regulatory roles. India requires world-class competence in the finance, commerce, and human resources portfolios and at the top of important regulatory bodies like the RBI and the Securities and Exchange Board of India (SEBI). Modi needs to learn to delegate and trust.

Third, the pace of investment in education and infrastructure needs to be raised a further notch. Despite its people capital and patches of excellence, India’s schools and universities are a long way short of world class. Its roads, airports and power supply are better than in the past but there remains a $1 trillion infrastructure deficit.

Fourth, the government needs to restructure what it does and how, learning to trust the market. A program of breaking up public-sector monopolies and privatization is essential. There is no logic in government digging coal, making steel, generating power, running airlines, operating ports and owning banks. What government does should be simplified through deregulation, redesigning processes and the use of IT.

Last, not everything can change in India simultaneously. India should learn from China in developing focus zones where investment and good governance results in a world-class operating environment much faster. State governments should compete for federal-funding partnerships by reforming what is in their purview such as schools, labor laws and land use.

India has an historic opportunity to become a middle-income country over the next 20 years. In Narendra Modi, it has a leader capable of making much happen very quickly, given his personal skills and domination of politics. The policy measures that deliver growth and address poverty are clear, not least from the Chinese example since 1979.  Modi should seize the opportunity of a second term to make his dreams for India a reality.

Alan Rosling is a Hong Kong-based strategic advisor and entrepreneur focused on India. He recently co-founded ECube Investment Advisors which is launching an active ESG fund for India. He is the author of "Boom Country?: The New Wave of Indian Enterprise", published in 2017. From 1991 to 1993, he was a special advisor to British Prime Minister John Major and a member of the No 10 Policy Unit.