Shinzo Abe, now Japan’s longest-serving prime minister, is steering Japan across tricky diplomatic waters. His longevity and experience, writes Yoshikazu Kato of the Asia Global Institute, give him the savvy and credibility to manage Japanese foreign policy through the geopolitical challenges posed by the “new Cold War” between the US and China. 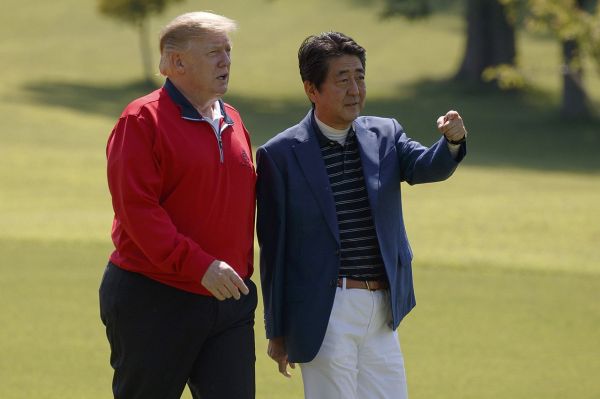 On November 20, Shinzo Abe became Japan’s longest-serving prime minister, surpassing a predecessor who had ruled over 100 years ago. Until Abe, who took office for exactly a year in September 2006 and then again in December 2012, Japanese leaders never lasted very long, sometimes less than a year or even just a couple of months. This had given Japanese politics the reputation of being inherently volatile. Abe’s stability has no doubt contributed to his relatively high approval rating. According to an NHK survey released on November 11, 47 percent of respondents supported his administration, while 35 percent disapproved.

Unless his current term is derailed by serious scandal, Abe should continue in office until September 2021. This longevity has given him an opportunity to put his own personal stamp on Japanese foreign policy and set it on a strategic course appropriate for the challenges of the times. Japan watchers have referred to an “Abe Doctrine” for a few years now, describing an approach that is more forceful and risky and is aimed at raising the nation’s diplomatic and security profile in the region and the world.

Japan, which rapidly developed its economy during the Cold War era as the member of the group of liberal democracies, has come to recognize that the world is at the beginning of what looks like a “new Cold War” period, characterized by the rivalry between United States and China. This is a comprehensive strategic competition that goes beyond economics and trade to include science and technology, military, regional and global leadership, soft or smart power, ideology and values. Japan will have to navigate through these treacherous waters, which will likely remain tricky and choppy even beyond the assertive (some might say pushy) administrations of US President Donald Trump and Chinese leader Xi Jinping.

Since Trump took office nearly three years ago, Beijing seems to believe more and more that US aims to change China through a "color revolution” with exploitation of the turmoil in Hong Kong a part of this strategy. For its part, Washington has come to view China as trying to recast the world, creating its own sphere of influence, in particular through its flagship Belt and Road Initiative (BRI), and convincing others to follow the “China Model”.

Whether or not these progressively more entrenched perceptions are based on reality, the fact of the matter is that China is challenging US global power economically, technologically and militarily. “The strategic competition between China and the US should be about all areas,” retired People’s Liberation Army Colonel Liu Mingfu, author of The China Dream: Great Power Thinking and Strategic Posture in the Post-American Era, told me in an interview. “To realize the China Dream, China has to reunite with Taiwan by 2049, the 100th anniversary of the founding of the People’s Republic of China.”

In this context, Tokyo’s top diplomatic priority has been clear: how to maintain and strengthen its alliance with Washington. As the Japanese Ministry of Foreign Affairs notes, the Japan-US security arrangements are indispensable, essential to the national security of both countries and to peace and stability in the Asia-Pacific region.

But since Trump’s election, Japan has struggled to manage the US alliance. Abe failed to convince Trump not to withdraw from the Trans-Pacific Partnership (TPP), the gold-standard regional trade deal that pointedly does not include China. Washington, for its part, prodded Tokyo into bilateral trade negotiations and demanded that Japan pay more for its security umbrella. Trump’s attitude towards its closest ally in Asia made Japan feel as if the US did not respect the strategic value of the security alliance or the rules- and values-based multilateralism that the US itself created and promoted since World War II.

China, meanwhile, has been Japan’s largest trading partner for imports since 2002 and for exports since 2009, accounting for about a fifth of total Japanese trade. In 2018, more than 8 million Chinese tourists visited Japan. The number is expected to exceed 10 million this year.

While China is Japan’s most important trade and investment market, relations between the two countries are fraught with irritants including territorial claims, historical disputes, and geo-economic and geopolitical competition. China’s economy may have exceeded the size of Japans, yet Japan is still a financial power and can more than hold its own in strategic investments such as assistance for developing economies in building infrastructure. In Southeast Asia, the value of Japan-backed projects exceeds those supported by China, even with Beijing’s ramp-up of the BRI.

Ultimately, Japan’s chief diplomatic challenge is to balance its two critical bilateral relationships. Finding the right working equilibrium is essential for Japan to sustain its security and prosperity. There is ample evidence of Abe’s attempts to do so. When the US withdrew from TPP, Abe took the lead, working with Australia, Singapore and Vietnam to conclude the Comprehensive and Progressive Agreement for Trans-Pacific Partnership (CPTPP), essentially the TPP with the US-relevant chapters suspended.

To distinguish himself as an effective statesman, Abe will need to lead Japan to play a more constructive and independent role in regional and global affairs

At the same time, Japan was promoting Abe’s signature foreign-policy concept of a Free and Open Indo-Pacific (FOIP) that focused on achieving goals for the region including peace, security, the rule of law and freedom of navigation. The Obama administration had picked up on the term “Indo-Pacific” as a way to draw India into the regional balance of power equation. The Trump White House seized on the FOIP as a guiding principle in its more confrontational stance towards China. While this was at odds with Tokyo’s use of FOIP as a vision through which it could facilitate its bilateral relations with China, Trump’s buy-in has helped bolster the US-Japan alliance.

Japan has been striving to be meticulous in achieving an appropriate balance between the US and China. Abe’s return to office in 2012 came after a rocky period in Japan-China relations when the longstanding territorial dispute over islets in the East China Sea sparked anti-Japanese demonstrations in China. His family background – he is the grandson of Nobusuke Kishi, prime minister from 1957 to 1960 who administered Japanese-controlled Manchukuo in northeast China in the 1930s – raised suspicions in Beijing. After initially appearing to want to calm the situation, Abe seemed to be stoking the flames when in December 2013, he made his first visit as prime minister to the controversial Yasukuni Shrine to war dead, something a Japanese leader had not done since 2006. He has not made another visit.

Abe has long had a reputation as a nationalist who has wanted to temper Japan’s post-war pacifism and allow it to take a more active military posture, which has caused concern in North and South Korea and China. His desire to amend Article 9 of the American-drafted post-war Constitution to add a reference to Japan’s Self-Defense Forces has not garnered enough support from the opposition parties and public opinion.

In September 2014, Abe seemed to turn a corner with China when he appointed two legislators known to favour closer ties with Beijing to senior positions in his ruling Liberal Democratic Party (LDP). Trump’s arrival on the scene has hastened the fence mending, with China too seeking to bolster ties. Prior to Abe’s renter to the Kantei in 2012, negotiations for the Regional Comprehensive Economic Partnership (RCEP), the ASEAN-centric trading arrangement that is widely viewed as China’s answer to the TPP. As a part of both groupings, Japan has clearly been pursuing its balancing act. (At the recent ASEAN Summit in Thailand, RCEP members announced that, with the withdrawal of India from the talks, they would sign an agreement next year.)

Relations between Tokyo and Beijing have improved enough that Xi Jinping is expected to make a state visit to Japan in the spring of 2020. Having forged a strong personal relationship with Trump and hosted him in Japan in May for the first state visit of the reign of Emperor Naruhito, welcoming Xi would be validation of Abe’s adroit bridge-building during testing times.

Going forward, Japan’s role is to facilitate relations between the two major powers in the Asia-Pacific – China and the US – and encourage them to support the global free-trade system and rules-based multilateralism, even as they are embroiled in a trade war and growing strategic competition. Japan needs the two behemoths to work together to address existing security risks, particularly tensions on the Korean Peninsula over North Korea’ nuclear ambitions. This is especially important in the absence of any sturdy regional security architecture.

Abe has his work cut out for him. Personal rapport can only get any leader of an American ally nation so far with the unpredictable Trump, who is likely to be even more prone to volatility in the run-up to next year’s presidential elections. Abe should push the US president to commit to rules- and values-based multilateralism and to avoid becoming isolated. This is crucial if the Japan-US alliance is to be effective in contributing to the security of the Asia-Pacific region.

Abe will also have to keep strong his personal relationship with Xi and other key regional and global players, including Indian Prime Minister Narendra Modi and Russian President Vladimir Putin. The Japanese prime minister’s staying power and his enhanced international standing are undoubtedly major diplomatic assets for Japan. In his remaining years in office, Abe would be in a unique position not only to serve as an honest broker between Washington and Beijing but also as a spearhead for rallying collective action to tackle major regional and global challenges such as the Korean Peninsula, Iran, climate change, refugees and migrants, and risks to the global economy.

As the most advanced market economy and liberal democracy in Asia, Japan has the opportunity to widen and deepen its international playing field and raise its global profile. The Japanese public, which has supported Tokyo’s initiatives to how world events such as the G20, the Rugby World Cup and the 2020 Summer Olympics, is likely to back an Abe Doctrine reboot.

But Abe’s credibility on the global stage probably hinges on what is his most pressing and immediate diplomatic challenge – the ongoing dispute with South Korea. The longstanding bitter arguments over their tragic past have spilled over into trade into security. Both sides have eliminated the other from preferential trading lists, and Seoul unilaterally abandoned a longstanding intelligence and security-sharing agreement, which was to expire on November 23.

A well-managed Japan-South Korea relationship is indispensable for the stability and prosperity for the Asia Pacific. The deterioration of the relationship between the two closest US allies in the region would undermine the balance of power in the region and give China the opportunity to use divide-and-influence tactics to strengthen its position.

To distinguish himself as an effective strategist and statesman, Abe will need to lead Japan to play a more constructive and independent role in regional and global affairs. His first priority must be to rise above historical enmities and reconcile relations with South Korea. This is not just a geopolitical and diplomatic responsibility but also a task that is core to the national interest of Japan.